Name That Tone! Test Your Tonal Recognition with Perfect Pitch. 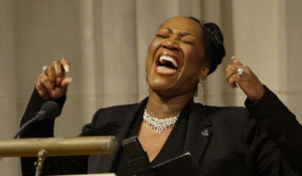 In Discover Magazine's July/August print edition, author-musician James Dziezynski writes about how your brain's neurobiology can affect your perception of pitch and sound. You can help psychology and music researchers learn about human auditory perception with Perfect Pitch, a citizen science project!

The male dickcissel, a member of the same avian family as the cardinal, can spend up to 70% of its day singing. These birds, like many others, sing a repertoire of long and complex songs to mark their territory and to court potential mates. While singing plays important social and cultural roles for humans, it doesn’t usually provide us with a new home or a new significant other (Miley Cyruses excepted). So from a purely Darwinian point of view, it may not be unsurprising that most people are lousy singers. But our voices aren’t necessarily the culprits, James Dziezynski explains in his recent Discover article, "Why is my voice so bad? It turns out that my brain is to blame." Dziezynski discusses how the human brain does a poor job at mapping the notes that we hear with our ability to reproduce those notes. The result is a miswired network of notes and vocal sounds -- in other words, literally singing to a different tune. "Think of it like someone rearranging all the keys on your computer keyboard -- your brain might expect the letter "R" because that's what the key says, but when the key is mapped to "U" there's an obvious disconnect,” says Dziezynski.

In the act of singing, it’s useful to relate the tones we hear to their musical notes, or pitch identification. While most people can identify a note that they hear in relation to other notes, a rare few can do it without any sort of reference. Possessors of this ability, termed absolute pitch, can name any note that they hear, and some can even reproduce a specified note on command. While this doesn’t necessarily make someone a good singer, it can certainly help, and absolute pitch is generally correlated with musical aptitude (Mozart and Yo-Yo Ma have been cited to have absolute pitch).

Absolute pitch is a rare trait -- approximately one in 10,000 people possess it. Incidence is higher in East Asian populations (so perhaps tiger moms are justified in their piano practice demands), and in blind musicians and people with an autism spectrum disorder. Probing the basis for absolute pitch further, scientists have found that genetics play a role (in a research study, absolute pitch possessors were four times more likely to have a family member with absolute pitch than people without the trait), and as University of Toronto Professor of Psychology Glenn Schellenberg says, “It’s nature and nurture, like everything else.” With respect to the nurture component, rigorous musical training is requisite for absolute pitch development, but more importantly, training has to commence by the age of 6 or 7. Scientists attribute this to a critical development period during which the brain has the ability to wire auditory patterns into memory and configure the map to transcend beyond simple recognition of tones into pitch labeling.

Psychologist and absolute pitch expert Diana Deutsch recognized that the idea of pitch labeling lent itself to linguistic cognition. Sounds in speech can be interpreted by the brain in a similar manner as musical sounds, and exploring this further, Deutsch discovered that fluency in tonal languages, such as Mandarin and Vietnamese, made musicians more apt to possess absolute pitch. In tonal languages, words are defined by specific lexical tones with which they are expressed, and therefore pitch conveys meaning, rendering it an essential component of the language.

The idea that learning absolute pitch can only take place early in development has recently been challenged by research from Harvard University Professor of Molecular and Cellular Biology Takao Hensch. In a study last year, Hensch showed that Valproate, a medication usually administered to treat epilepsy, can open a new learning period in adults and improve their ability to distinguish and label musical tones. Hensch and his colleagues enrolled subjects in a double-blind placebo-controlled study in which young adult males with no musical training were prescribed Valproate and assigned music learning tasks. By the end of two weeks, the group taking Valproate had significantly improved their ability to identify tones as determined by an absolute pitch test. Hensch’s work suggests that we may be able to synthetically modulate the human learning experience, enhancing neural plasticity and allowing for cognitive rewiring.

If you’re curious to find out whether you possess absolute pitch, you can participate in Perfect Pitch, a citizen science project that tests for absolute pitch as part of a collaborative research effort between Schellenberg and University of Brasilia Professor of Music, Patricia Vanzella. The test starts off with a brief questionnaire about your musical background and training, and then it proceeds to play tones, asking you to identify the note played. The test consists of four sets of 24 tone trials and each set has a different timbre or instrumental sound. Although you only have three seconds to identify the note of each 24 tones, you can rest as much as you want between sets.

Schellenberg and Vanzella’s research has explored the role of timbre (the tone produced by a particular instrument) and the source of a note on detecting absolute pitch. Schellenberg and Vanzella surmised that a person’s ability to identify a tone is affected by the instrument one trains on and that vocal tones are harder to discern than non-vocal ones. So far, information gathered from the citizen science project underway has showed that absolute pitch is indeed less likely to be detected when voice tones are used compared to musical or pure tones. The authors speculate that this relates to the way the human brain processes voices, since they provide not only auditory cues but communication information as well, which may interfere with the ability to identify tones. This may provide some clues as to why autistic people have increased propensity towards absolute pitch -- given their altered perception of social interactions, it’s possible that they don’t experience this same interference by vocal tones.

If you think you might have absolute pitch, give the test a try and find out what tune you sing to!