My Other Ear Is a Tooth: Bone Conduction Helps the Hard of Hearing 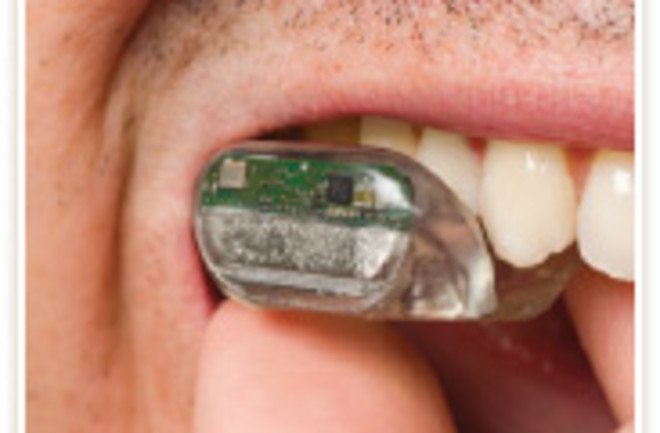 When Beethoven got frustrated with his deafness and was struggling to hear the music that he had composed, music historians report that he laid his piano down on the floor without the legs and pounded the keys loudly in an attempt to feel the vibrations. Other times, he tried to hear by clenching a stick tightly between his teeth with one end touching the piano so the sound could transfer from the piano to the stick, and then travel through his teeth to finally reach his ear. We aren't sure how much of his music he heard this way, but a new device uses some of the same conduction techniques to restore hearing to people who are deaf in one ear. Thanks to a couple centuries of technological enhancement, there are now no sticks involved. The new system, called SoundBite, has two distinct pieces. One piece clips behind the ear and houses a receiver, a wireless transmitter, and attached microphone. The other part goes inside your mouth, and clips onto your teeth. Discovery News explains how it works:

The microphone captures sound. A digital audio device processes the sound signal and transmits it wirelessly to the device inside the person's mouth. The sound is then carried along the teeth, through the jaw bones to the inner ear. It's particularly helpful to patients who have problems with their middle and outer ear, because sound bypasses these places entirely.

Wonder what Beethoven would have said about that. Related Content: Discoblog: Find Out If You're Tone Deaf Discoblog: Can Golfing Make You Deaf? Discoblog: How Long Would It Take a Physics Lecture to Actually Kill You?Image: Sonitus Medical