My Letter from Francis Crick 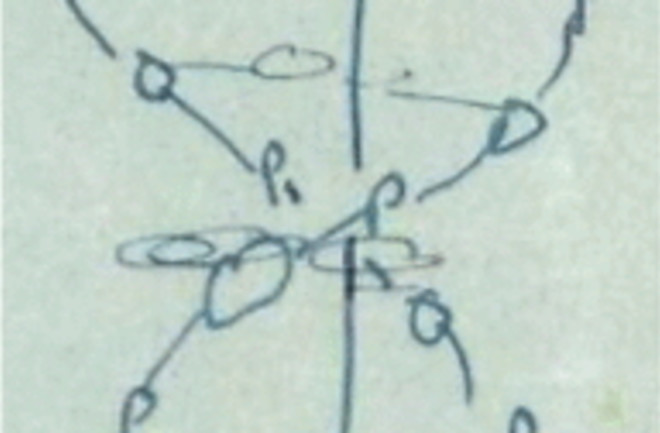 Francis Crick's drawing of the double helix, from his letter to his son. Christie's. Earlier this year, the 23-karat gold medal awarded to Francis Crick was auctioned off for £1.3 million, or more than $2 million. When I heard the news, I thought it seemed a little tacky. Then I went on to read that Crick’s family will donate 20 percent of the money to the establishment of the Francis Crick Institute in London. That took out some of the sting. Not long afterward another bit of Crick memorabilia went on the auction block at Christie’s: a letter, dated March 19, 1953 from Crick to his 12-year-old son, Michael, who was away at boarding school. It went for £3.45 million or about $5.3 million. Half will go to the Salk Institute in La Jolla, where Crick worked for many years. It is easy to see why the letter was worth so much more than the piece of gold. In just a few hundred words, Crick provides as crisp a description of DNA as you will every see, complete with his hand-drawn sketch of the double helix and other rough diagrams. It was a discovery clear enough for a 12-year-old to understand, and one that completely transformed the life sciences. I have my own letter from Crick, long buried in a file drawer in my office, though I doubt it would fetch much on the market. In the year 2000 after my biography of Murray Gell-Mann was published, I heard from a reader in Pasadena. He knew Crick, and he was urging me to write his biography. He offered to ease the way by approaching the great man himself. I wasn’t certain that I was ready to take on another huge project but I followed up with a letter, sounding Crick out about the idea. I was spared the postcard Crick was famous for using to fend off any and all requests. Here is a copy from the Francis Crick Archive at the Wellcome Library:

But I did receive a short reply:

And so I did. Nine years later Robert Olby, a historian of science, published Francis Crick: Hunter of Life's Secrets. Brenda Maddox is now doing Watson’s life story. She is also the author of Rosalind Franklin: The Dark Lady of DNA, which probably did more than anything to bring recognition to Franklin -- both for the important role her x-ray crystallographic work played in the discovery of the double helix and for the condescending way she was treated by Watson and other colleagues. Many people were surprised last month when, in a short essay on DNA's 60th anniversary, she ended like this:

Watson has been much criticized for his portrayal of the "terrible Rosie" in The Double Helix but, as Franklin's biographer, my answer to critics is that if it weren't for Watson, no one would have heard of Rosalind Franklin. . . .

I guess it is natural for a biographer’s allegiances to shift with a change of subjects. We won’t really know until her book is published. Meanwhile I was reminded of a remarkable section in Judson’s The Eighth Day of Creation where he recreates, through Franklin’s journal and other sources, what she knew and when she knew it, every step along the way. He writes of her “grievous slowness of intuitive response,” of her working “head down and doggedly, ingeniously struggling in the wrong direction.” “It is easy to feel great sympathy with Franklin," he concludes. "The fact remains that she never made the inductive leap.” I went back and reread those passages a couple of nights ago and then got a copy of Maddox’s book from the local library. I’m still trying to reconcile the two accounts and will write more about that in my next installment. Postscript: After my last post, The Best Science Book Ever Written, I received a nice email from Terrence Monmaney, the executive editor of Smithsonian magazine, pointing me to his beautiful remembrance of Judson, who was his teacher. It was posted at The Last Word On Nothing, an excellent forum by science writers created by Ann Finkbeiner, another Judson protégé.