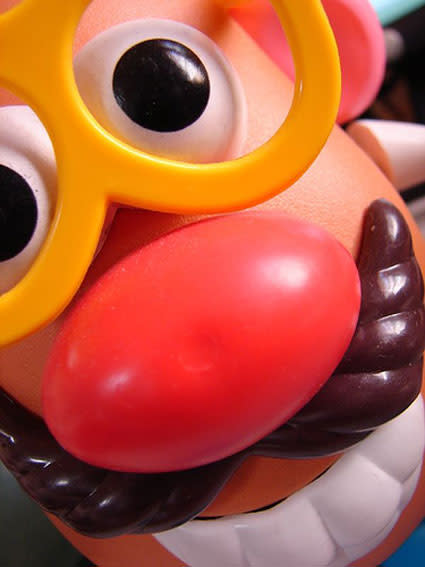 What monkey mothers eat has a large impact on how skittish their offspring act in stressful situations like stranger danger--or the presence of a Mr. Potato Head in their cage. According to researchers, even normal monkeys find the toy's large eyes to be "mildly stressful." But baby monkeys from mothers who were fed a high-fat diet (over 35 percent of calories from fat, modeled after a typical American diet) had a much stronger reaction to an encounter with the spud man, and also spazzed in the presence of an unknown human. The study, presented at the Society for Neuroscience annual conference, found that in stressful situations, the female offspring were more anxious and the males more aggressive, explains LiveScience:

The babies of the moms on the fatty diet were overwhelmingly more freaked out by the toys and stranger, the researchers found. That was especially true of female monkeys, which were reluctant to approach the toys (although they responded eagerly to food). The male offspring of fatty-diet moms were more likely to behave aggressively, threatening the human intruder in the stranger test, for example.

The behavior didn't seem to result from the mother's body fat content--the attitude changes occurred in the children of both fat and lean monkey moms on the high-fat diet. When they looked closer, the researchers found that the difference might lie in the brain. When they examined the brains of the offspring, researchers found disruptions in serotonin signaling, which normally provides a feeling of well-being. The researchers think that placental inflammation brought on by the high-fat diet exposed the monkey fetuses to proteins called cytokines, which are known to cause serotonin disruptions. It also doesn't seem to matter what the offspring eat themselves, study researcher Kevin Grove told LiveScience

"Even if we take the offspring, after they're weaned from their mothers, and put them back onto a normal, healthy diet, their susceptibility to stress and anxiety still remains," Grove said. "This really appears to be a permanent issue that occurs in utero."

You heard it here, potential mothers-to-be: Watch what you eat while pregnant, or your child could end up with a lifelong potato head paranoia. Related Content: DISCOVER: How Did 9/11 and the Holocaust Affect Pregnant Women and Their Children?

Discoblog: Nutritionists to America: For the Love of God, Don’t Try the Twinkie Diet

Discoblog: Mozart Won’t Make Your Baby Smarter, But the Right Food Might

80beats: "Metabolic Sins of the Father": Fat Dads May Give Their Kids Diabetes

Not Exactly Rocket Science: You are what you eat – how your diet defines you in trillions of ways