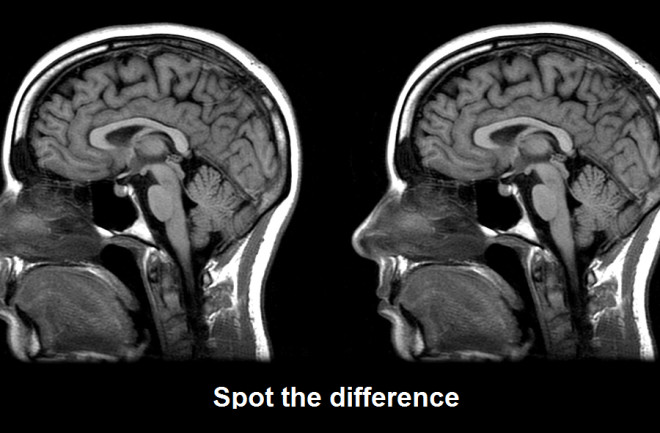 A new paper threatens to turn the world of autism neuroscience upside down. Its title is Anatomical Abnormalities in Autism?, and it claims that, well, there aren’t very many

Published in Cerebral Cortex by Israeli researchers Shlomi Haar and colleagues, the new research reports that there are virtually no differences in brain anatomy between people with autism and those without.

What makes Haar et al.’s essentially negative claims so powerful is that their study had a huge sample size: they included structural MRI scans from 539 people diagnosed with high-functioning autism spectrum disorder (ASD) and 573 controls. This makes the paper an order of magnitude bigger than a typical structural MRI anatomy study in this field. The age range was 6 to 35.

What did they find? Well… not much. First off, the ASD group had no differences in overall brain size (intracranial volume). Nor were there any group differences in the volumes of most brain areas; the only significant finding here was an increased ventricle volume in the ASD group, but even this had a small effect size (d = 0.34). Enlarged ventricles is not specific to ASD by any means – the same thing has been reported in schizophrenia, dementia, and many other brain disorders.

Here’s some of the data: each double bunch of dots represents one of the research sites, with grey being the autistic brains and black the controls. Each row contains the data from one part of the brain. You can see that there’s just not much difference. While a few sites find differences in a few measures, they’re not consistent across sites. Only ventricle volume (bottom row) is different overall.

A detailed cortical morphometry analysis of the brains did find a few statistically significant results in cortical thickness, but not other metrics:

But even these differences was small. Using a machine learning technique called linear discriminant analysis, Haar et al. attempted to distinguish between the ASD and control brains on the basis of neuroanatomy. They did this in a number of different ways. The best performance was 60% – better than nothing, but very modest. And this was the best result: using other analysis options, the performance was closer to 50% – which is no better than flipping a coin.

Worryingly, Haar et al. show that the ‘accuracy’ of this analysis could be increased by lowering the sample size. They generated random subsets of their data-set and tested the same discriminant analysis on these artificial small samples. They report that “Around 30% of the randomly selected groups containing 20 subjects in each group exhibited decoding accuracies over 60%.” – which raises the possibility that previous reports of highly accurate ASD ‘diagnosis’ on the basis of brain structure, were false positives caused by small samples.

There was no evidence for between-group differences in any measures of gross anatomy or in specific brain regions including the amygdala, hippocampus, most segments of the corpus callosum, and the cerebellum, which have been implicated in previous anatomical studies of ASD.

These results suggest that many of the previously reported anatomical abnormalities are likely to be of low scientific and clinical significance… anatomical differences between high-functioning ASD and control groups (aged 6 – 35 years old) are very small in comparison to large within-group variability.

This suggests that anatomical measures alone are likely to be of low scientific and clinical significance for identifying children, adolescents, and adults with ASD or for elucidating their neuropathology.

I think this is an important paper and one that the autism field will need to take very seriously. There are hundreds of studies claiming to have found differences in brain structure in autism, many with small sample sizes, and Haar et al’s failure to replicate almost any of these claims, is sobering. It’s important to remember, however, that this paper only considered brain anatomy. It doesn’t contradict studies looking at brain function, nor does it relate to microanatomy or neuropathology (i.e. microscope work.)

As far as it goes, though, it’s a bit of an earthquake – and I’m not sure how much of the field is left standing.