Zach Weinersmith (of) put up a blog post about the subjective nature of morality, which I tweeted approvingly. But afterward I realized that, while our substantive views are pretty much in agreement, I sometimes use a very similar-sounding analogy as the one he invoked, but in the precisely opposite sense! Zach's analogy is the following: "objective" morality is to subjective morality as the rules of basketball are to the rules of Pankration, an ancient Greek free-for-all fighting competition. That is, in basketball, we have rules that are handed down from on high (the NBA or some other governing body), just as we do with objective morality (God or the nature of the universe or some such thing). In Pankration, while there are no formal rules, there are patterns that evolve due to the nature of the game; i.e., go for the fingers and other easily-damaged parts of the body. These kinds of rules are different, of course, but they do come into being over time. 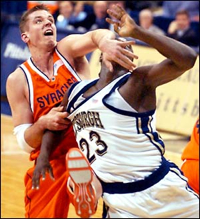 That's fine as far as it goes, but I like to use the basketball analogy to make a different point. I don't believe in objective morality; the universe just is, and there's nothing "out there" that judges human behaviors to be good or bad. These categories of good and bad are things we human beings invent. And in that sense, in my version of the analogy, the rules of morality are exactly like the rules of basketball! The difference is that I'm not analogizing the NBA to God or the universe, I'm analogizing the NBA to a collection of human beings that make up rules (which is a pretty exact analogy, really). The point is this: the rules of basketball were not handed down by God, nor are they inherent in the structure of the universe. They were invented by James Naismith and others, and fine-tuned over time. We could invent different rules, and we wouldn't be making a "mistake" in the sense we're making a mistake if we think the universe was created 6,000 years ago. We'd just be choosing to play a different game. The crucial part, however, is that the rules of basketball are not arbitrary, either. They are subjective in the sense that we can make them be whatever we want, but they are non-arbitrary in the sense that some rules "work better" than others. That's pretty obvious when you hear basketball fans arguing about the proper distance for the three-point line, or the niceties of hand-checking or goaltending, or when a crossover dribble is ruled to be traveling. People don't merely shrug their shoulders and say "eh, it doesn't matter, the rules are whatever, as long as they are fairly enforced." The rules do matter, even though the choice of what they are is ultimately in our hands. That's because we have a goal when we invent the rules of basketball: to create the most fair and entertaining game. The distance to the three-point line is very finely calibrated so that it's far enough away to be a challenge for NBA-level talent, but close enough that it's a valuable shot to take under the right circumstances. "Subjective" (or "invented") doesn't mean "arbitrary." Likewise for morality. The rules of morality are ultimately human constructs. But they're not arbitrary constructs: we invent them to serve certain purposes. People are not blank slates; they have desires, preferences, aspirations. We mostly want to be nice to each other, be happy, live fairly, and other aspects of folk morality. The rules of morality we invent are attempts to systematize and extend these simple goals into a rigorous framework that can cover as many circumstances as possible in an unambiguous way. And what if someone doesn't agree with our folk morality or the systematization thereof? What if someone wants to bring some Calvinball to our pickup game? We do the same thing we'd do in basketball: we penalize them. We call a foul, or traveling, or just refuse to play with them. And we don't need to invoke God or the laws of nature to do it. It's true that we made up the rules, but they are no less enforceable for it.