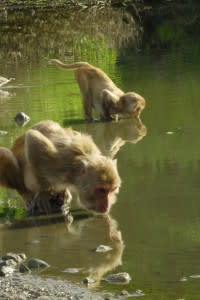 Gift-giving is at its peak this time of year. As much as we all enjoy receiving gifts, there is also joy in giving gifts to others. Seeking such selfless enjoyment is an important social behavior, and thanks to a new study published in Nature Neuroscience this week, there's evidence that humans may not be the only species to pursue these social rewards. Researchers at Duke University tracked the brain activity of rhesus macaques making simple sharing decisions. In one scenario the monkeys could choose to keep a reward (juice) or give it to another monkey. Most kept the juice. In the second scenario the monkeys could choose to give the juice to another monkey, or to have the reward removed. Most gifted the juice. During these activities electrodes recorded activity in three areas of each monkey's prefrontal cortex---the part of the brain known to be associated with social decision-making in primates. Two areas of the cortex simply responded to getting or not getting the juice, but the third area instead responded when a monkey chose to give the juice away. In humans, this particular area of the brain is associated with empathy. The researchers suggest that the monkeys' brains may be keeping track of social rewards. The finding calls into question what humans and other primates categorize as a reward. It indicates, for instance, that giving can be as rewarding as receiving for social primates. That will give evolutionary biologists new fodder in the ongoing debate over how altruism evolved. The researchers also suggest that identifying the neural pathways that direct social behaviors may in turn help scientists understand the imbalances associated with conditions like autism and sociopathy. Image courtesy of Steve Chang, et al. / Duke University