An improved method for recording brain activity could prove a major asset to neuroscience, according to a Nature paper just out: Moving magnetoencephalography towards real-world applications with a wearable system

The Nature paper introduces a MEG scanner based on sensors called OPMs – optically pumped magnetometers. The key advantage of OPMs over SQUIDs is that they don’t need to be supercooled, so there is no need for (expensive) liquid helium.

Eliminating the liquid helium also means that the new MEG scanner is much more portable. It can be worn a bit like a helmet (the head cast being 3D-printed), permitting head movement. This makes the system more comfortable and allows participants greater freedom, compared to the old-style MEG.

These images illustrate the difference: 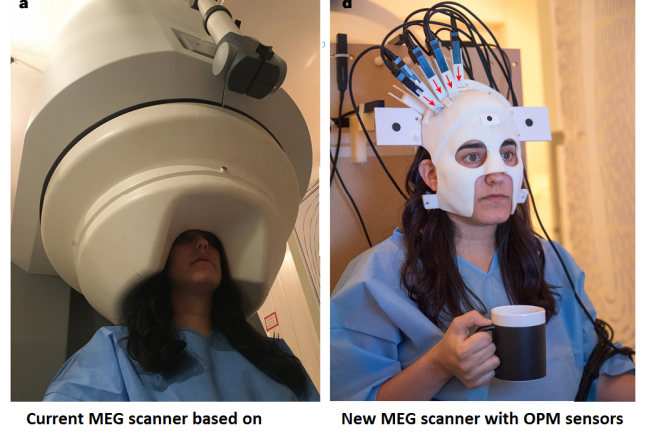 In terms of data quality, the Nature paper shows that the new system measures up well against conventional MEG, even in the presence of head movement. Thus, the new system could allow researchers to measure brain activity while participants perform realistic movements and actions (such as holding a cup of coffee, pictured above.)

However, there are limits to the mobility of the new system. The OPM sensors only function within a space which has been specially shielded to eliminate the Earth’s magnetic field. This can be achieved using nulling coils, which could be installed e.g. in the walls of a room to created a shielded area in which MEG recordings take place: 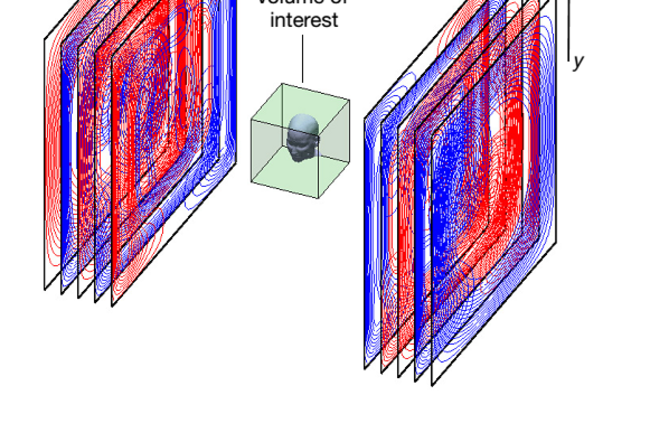 Therefore, while a participant could move their head while using the new system, they couldn’t, say, get on their bike and ride off – which is possible using the related technique of EEG.

Some of the press coverage of the new method has also been a little over-optimistic. New Scientist claims that “For the first time, babies and young children will be able to have their brain activity measured”, but neuroscientists already routinely use EEG and fMRI to measure activity in such age groups. Pediatric MEG scanning is admittedly less common, but not unheard of.

I wonder if the biggest benefit of OPM MEG might turn out to be financial? A conventional MEG scanner is very costly, not just to purchase but also to maintain: this is because the liquid helium must be constantly replenished, and liquid helium isn’t cheap. It may even be a finite resource which is running out.

Could OPMs bring down the cost of MEG? The Nature paper doesn’t talk about prices. But a single MEG OPM sensor costs $8000-$10,000, according to QuSpin, a company who make them (QuSpin staff helped write the Naturepaper.) This would add up to a lot of money if you wanted to buy, say, 128 or 256 sensors to cover the entire head, like in conventional MEG. Then again, you could save money if you wanted to focus on a single brain region and only use a handful of sensors.

If the cost of MEG does come down in the future, it might help the technique to achieve greater use within neuroscience. Could the day even come when MEG overtakes fMRI as the most popular functional imaging technique…?