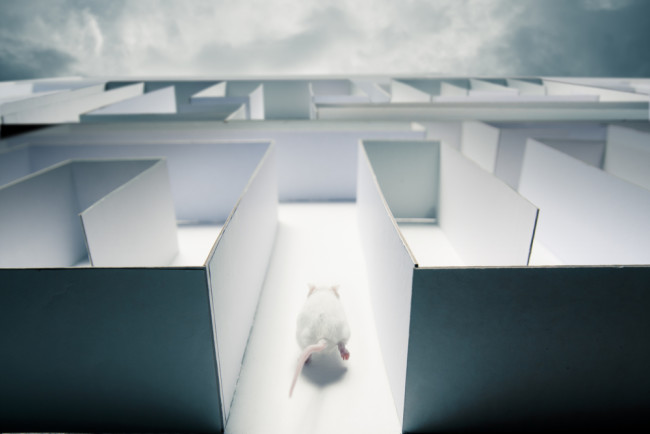 In an experiment that could explain the origin of the maniacal mouse in “Pinky and the Brain,” researchers spliced a human brain gene into lab mice, and it made them smarter. These mice aren’t taking over the world any time soon, but they are certainly adept at getting through mazes. Mice genetically modified to carry a human gene associated with speech and language, called Foxp2, learned how to find a reward in a maze significantly faster than normal mice. While this is good news for the modified mice, the findings also reveal clues about how this particular gene contributes to humans' unique intellectual abilities.

This isn’t the first time mice have been the beneficiaries of human brainpower. In 2013, scientists made smarter mice by transplanting human glial cells

into the brains of newborn mice. However in this case, the mice had the gene from conception, and so their brains were more thoroughly "humanized." Researchers compared groups of 10 to 20 "humanized" mice with the same number of controls in a series of navigation tests. The mice were placed in T-shaped enclosures and were rewarded with chocolate if they made the correct turn at the end. The mice could use two options to help them make the right choice: landmarks visible from the maze, or the texture of the floor (rough turn left, smooth turn right). When placed in a maze where mice could use both landmarks and floor texture, mice with the human gene performed far better than normal mice. They learned the route in 7 days rather than the 11 days it took normal mice. However, when mice could only use one cue — landmarks or texture — there was no significant performance difference. So these mice weren’t all that smart? Not so fast.

Researchers set up their experiment to specifically test two types of learning that occur in humans: declarative and procedural. Declarative learning requires conscious effort, like reading directions to a new place. Procedural learning is unconscious, like driving your daily route home. The landmarks in the maze stimulated declarative thinking, while the floor textures stimulated procedural thinking. Mice with the human gene, researchers say, excelled when both options were present because they were better than normal mice at transitioning between conscious and unconscious thinking. The advantage was muted when only one type of navigational aid was available. They published their findings Monday in Proceedings of the National Academies of Science.

A Key to Learning

This experiment highlighted the important role that Foxp2 plays in human cognitive development. When we learn skills such as a new language or how to play an instrument, we use conscious (declarative) thinking at the start, but with practice these skills become unconscious (procedural) in our minds. Researchers believe the Foxp2 gene is key to making this transition, but how our minds do it is still not fully understood. The findings highlight how influential a single gene can be on the cognitive abilities of both mice and men. And they underscore another interspecies similarity too: the motivating power of chocolate.