Meta-Neuroscience: Studying the Brains of Neuroscientists

How do neuroscientists' brains work? In a remarkable (and very meta) new paper, German researchers Frieder Michel Paulus et al. scanned some neuroscientists (their own colleagues) using fMRI, to measure the brain response to seeing neuroscience papers. The study is out now in PLoS ONE: Journal Impact Factor Shapes Scientists' Reward Signal in the Prospect of Publication Paulus et al.'s paper has already got a lot of attention: it's been featured on the famous Improbable Research blog, who call it "obviously a joke intended for the small community of scientists who use FMRI equipment". However, they say, it's also "a good example of how a joke meant for insiders can be difficult or impossible to explain to anyone else". Well, I don't think it's too hard. Basically, the neuroscientists were put in the scanner and shown various stimuli. Some of these were pictures of money. There were low, medium, or large amounts:

Sometimes the images were mock-ups of neuroscience papers. The trick was that these 'papers' were customized for each neuroscientist, to make it look as if they had written it themselves. So for instance, the author list was made to feature the participant's own name. The title and text were based on his or her research interests. The final touch was that the 'papers' were made up in the style of either a low-ranking journal, a moderately ranked one, or a highly prestigious one. In today's world the prestige of an academic journal is largely determined by its Journal Impact Factor (JIF). So Paulus et al. mocked-up the fake papers to look like they were published in a low, medium, or high JIF neuroscience journal. Like so:

And it turns out that the neural reward-related responses to seeing your name in a high impact journal are rather similar to - or even stronger than - the response to seeing lots of cash. Here's the key result, showing the fMRI signal in the nucleus accumbens (NAcc) in response to (cues predicting the appearance of) the different stimuli: 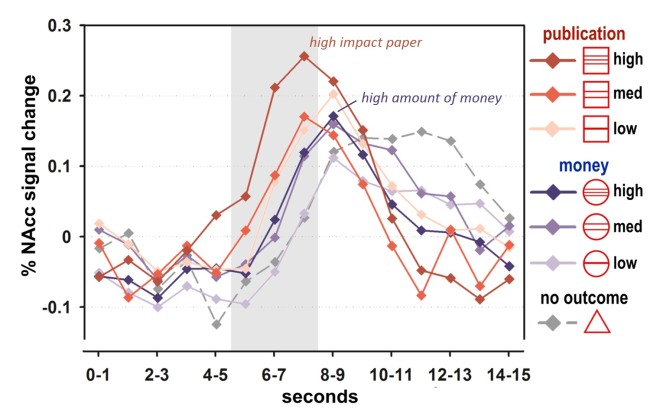 So the 'joke' is that neuroscientists' brains get more excited about publishing in Nature Neuroscience than about stacks of 500 Euro notes. The authors conclude:

The results of this study show how scientists have adapted to the predominant reward structure in the environment and have incorporated the currently prevailing paradigm of the scientific community to "publish (in high-impact journals) or perish" in order to guide behavior. From a neuroscience perspective, this study offers novel insights by providing first empirical evidence that the Journal Impact Factor and the authorship position do actually influence human behavior and neural response patterns. Even though the impact of the Journal Impact Factor has been extensively discussed, with first empirical data showing that it influences institutional decision making in academia, nothing was known about how it influences scientists’ motivation. Through this experiment, albeit in a very controlled laboratory setting, we now have an idea of how deeply entrenched the concept of the Journal Impact Factor has become on the neural systems level.

This is the most meta neuroimaging paper I've ever seen. A few years ago there was a study that scanned doctors while they looked at scan images, but this goes much further. What's the next step? Maybe some researchers could partner with a neuroscience journal and scan some of the peer reviewers at work to find the neural correlates of accept, reject, and revise decisions? Or, to go even further beyond meta, someone could scan themselves while writing the paper about their self-scanning experiment.