The super-MRI used in the Human Connectome Project is the ultimate brain hacking machine. 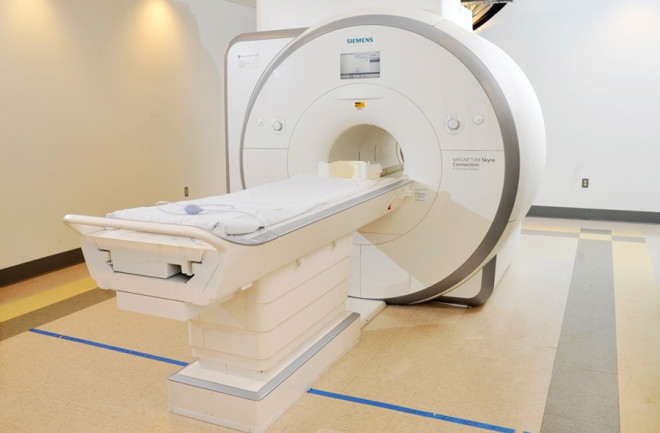 On the outside, it looks like every other brain scanner — a hollow metal cylinder with a hard, retractable cot. On the inside, however, the Connectome scanner boasts the most advanced brain imaging technology in the world. Installed at Massachusetts General Hospital in Boston in September 2011, this magnetic resonance imaging (MRI) scanner is poised to be the Hubble Space Telescope of neuroscience.

The scanner, built as part of an $8.5 million federal grant, features a gradient field that is eight times more powerful than a conventional MRI machine. It produces images that are four to eight times more detailed, and does so in one-sixth of the time. The scanner, quiet enough for a baby to sleep inside, relies on a new brain-imaging technique called diffusion MRI, which maps long-distance white matter connections in the brain by tracking the movement of water.

The scanner plays a part in the Human Connectome Project, a five-year effort with National Institutes of Health funding to map every twist and turn of the 86 billion neurons in the human brain. Researchers hope that clarifying the structure of the brain will help us understand its function and dysfunction.

Typically, scanning is done for the purpose of finding lesions in the head, such as for diagnosing a stroke, says Van Wedeen, inventor of one type of diffusion MRI called cross-fiber and director of connectomics at the Athinoula A. Martinos Center for Biomedical Imaging at MGH. Yet evidence suggests that conditions such as post-traumatic stress disorder, autism and dementia involve alterations in white matter. So while the Connectome scanner is currently used only for research purposes, it could someday objectively diagnose mental disorders, he says.

In an MRI machine, a powerful magnetic field causes protons in the body to line up like violin strings under tension, then a pulse of energy plucks those “strings,” making them hum. Small radio frequency (RF) coils strategically placed around a patient’s head — the twisted copper wires shown in the image at right — act as antennas, detecting that hum and transmitting it to domino-sized green amplifiers, which read the signal and pass it on to an external computer. There, the signals are analyzed and transformed into a colorful image. Conventional brain scanners have up to 32 RF coils, but the Connectome scanner brandishes 64, overlapping around the entire head, as a way to detect more signals at once, speeding up the time and improving the quality of a brain scan.

The Connectome scanner is unique because of its gradient coils: thick copper wires that focus and manipulate the magnetic field to detect where brain fibers are located. These gradient coils are eight times as powerful and twice as thick as those in a conventional MRI. Seen at left as a reddish thumbprint on the top of the inner tube, they are carefully sculpted in a precise pattern to encode data as accurately as possible. Designing the gradient coils, Wedeen says, was “as complicated as designing the engine of a new aircraft.”

At peak use, 12 power cables deliver a whopping 24 megawatts of power to the scanner, equivalent to the amount of energy used by a nuclear-powered fast-attack submarine. That much power would melt the machine if not for the insulation of the silver doughnut-shaped cylinder and gray rubber hoses that run cold water through the machine. “Everything had to be perfectly thermally balanced,” says Wedeen.

[This article originally appeared in print as "Under the Hood of the Ultimate Brain Hacking Machine."]