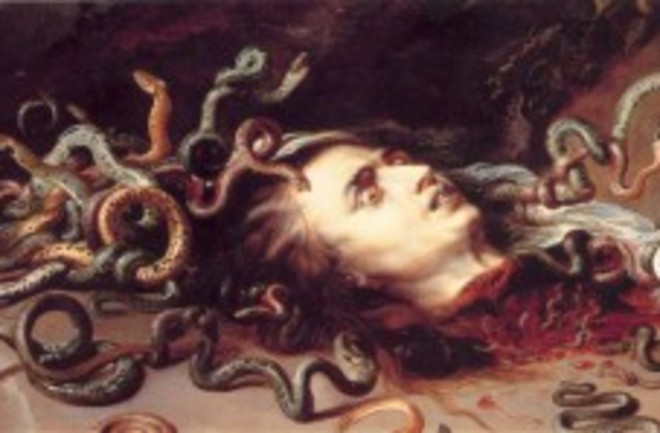 Rubens's "Head of Medusa," circa 1617-18. Wikimedia Commons There is a rule of thumb I’ve found useful for sifting through the science news. When you come across a long article whose headline is posed as a rhetorical question, you are usually safe in assuming that the answer is no. Unless you require further amplification, you can turn the page or click another link, and find something else to read. Late last year a story appeared on the cover of The New York Times Magazine entitled, “Can a Jellyfish Unlock the Secret of Immortality?” Well, no. Of course, a jellyfish cannot unlock the secret of eternal life (as if there were such a thing). These ectoplasmic beings are mesmerizing to watch behind glass as they hover translucently in the water. They look almost ethereal. But only with great rhetorical excess can they be described as living forever. A particular variety, Turritopsis dohrnii, we learn in the article, is capable of turning back the biological clock. From a fully formed creature called a medusa -- it was named for its resemblance to the tentacle-headed mythic beast -- it reverts step by step to a polyp and starts the cycle again. I would very much like to live forever (and even backward) but only if I can bring along my memories. Most of them anyway. As Paul Raeburn noted on the Knight Science Journalism Tracker, all this jellyfish passes on are its genes, something every creature does when it reproduces. My colleague John Noble Wilford at the Times once described, with a bit of irony, the standard structure of a science story. You start by making a bold assertion and then sentence by sentence you take it back. Not entirely, but in the coming paragraphs you qualify. “To be sure grafs,” Wilford calls them. “Scientists today announced that an experimental quantum computer has succeeded in factoring a number exponentially faster than possible on an ordinary machine. This is an early step toward computers in which arrays of single atoms will be able to crack what are now impenetrable codes.” To be sure the computation performed in the experiment was trivial -- factoring the number 15. To be sure the experiment took place under the most delicate conditions, requiring temperatures hovering near absolute zero. To be sure scaling up the mechanism to tackle really big numbers -- the kinds that current encryption schemes are based on -- will be difficult if not impossible. . . . But this is still pretty cool. You learn the qualifications quickly and then go on to read about what may be a truly interesting development. When done correctly there is nothing wrong with the device. The frustrating thing about the jellyfish article was that the to be sure grafs didn’t come until the story was well underway. For all of that, it was a nice piece of writing. The author, Nathaniel Rich, is the columnist and critic Frank Rich’s son. Through some combination of nature and nurture, he has absorbed a talent for good prose. I wonder if the piece had originally been intended as a profile of an eccentric, obsessed scientist (he performs his own karaoke songs and appears on TV as the Immortal Jellyfish Man) and an ironic commentary on the impossible quest for immortality. Then perhaps it became hopped up in the editing process -- loaded up front with over wrought intimations of significance. The painting of Medusa by Rubens reminds me of a head writhing with question marks. Maybe a question mark headline should be called a Medusa hed. ("Hed" like “graf” is newspaper-era journalese). A medusa hed is not an infallible warning sign. A few weeks later, as I was scanning the Web, my eyes lit upon another science story in the Times magazine: Is the Cure for Cancer Inside You? Here we go again. I clicked the link and immediately saw a sign that this story most probably had some depth. The byline was Daniel Engber, a colleague whose work I admire. In an excellent account that balanced promise with skepticism, he described recent developments in immunotherapy -- stimulating a patient’s own immune system to fight back against a malignancy. To be sure the therapy is very experimental, involving risky interventions from outside the body. It can unleash vicious side-effects like a massive autoimmune attack. To be sure the patient featured in the story, a renowned immunologist with pancreatic cancer, ultimately died. His death, in fact, came days before the announcement that he had won a Nobel Prize. The cure for cancer will not be found entirely inside of us, but immunotherapy is one of the most anticipated new fronts in the war on cancer, and one that I will be considering in future posts. Next, however, I will write about an article that appeared this week in Slate. The headline: Does Fluoride Make Your Kids Dumb?