Map: Which Countries Are Happiest? 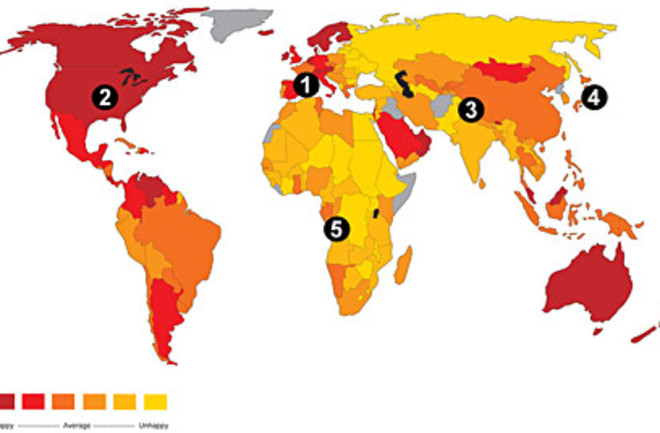 University of Leicester psychologist Adrian White pooled data from over 100 studies that looked at self-reported happiness all over the world. The result is a global projection of subjective well-being that ranks 178 countries according to how satisfied their residents are with their lives. White also compared satisfaction scores with GDP, life expectancy, and access to education in each country. Life expectancy was most tightly linked to happiness, suggesting that health may be the biggest factor in contentment. Income showed the next strongest correlation, followed closely by education.

The happiest place on Earth is actually Denmark, which reported the highest satisfaction level in the world. Long life expectancy and high income helped propel Denmark to the top (but those Danish pastries probably didn't hurt). Other top scorers included Switzerland and Austria, which took 2nd and 3rd place, respectively.

2GO TO YOUR HAPPY PLACE

Iceland (4th), Finland (6th), and Sweden (7th) fared very well. Canada landed in 10th, the United States clocked in at 23rd, and Australia ended up 26th. The Rolling Stones may claim otherwise, but folks in the U.K. seem to be getting at least some satisfaction: they placed 41st.

Inhabitants of the two most populous countries, China (82nd) and India (125th), didn't report being particularly satisfied with life. Each is home to over a billion people, more than three times as many as the next most populous country (the United States).

4LAND OF THE RISING SUN?

Japan's ranking (90th) was surprisingly low given its high scores for health, wealth, and education. White suspects cultural factors may be at work. Some researchers speculate that a focus on competition and a tendency to downplay enjoyment may contribute to low reported happiness among some Asian cultures.

5THE TOUGHEST SPOTS ON EARTH

The Democratic Republic of the Congo, Zimbabwe, and Burundi came in at the bottom of the list. Life expectancies in these impoverished, AIDS-ravaged African nations are in the mid-thirties to early forties. Former Soviet states like Moldova and Ukraine fared only slightly better. "There are countries with much greater needs than our own," White says. "Instead of selling self-help to the worried well, perhaps we should investigate the effects of opening a school or health-care center in a place where there had not been one before."