A new mother wants to know if she's losing her mind, or if it's all in her head. 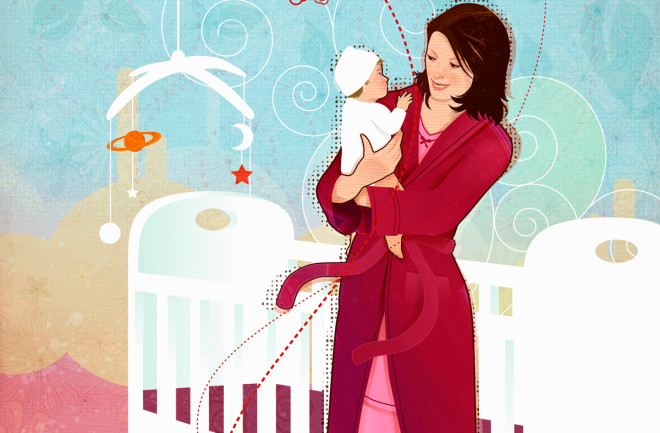 I’m in the kitchen, but once again, I can’t remember what I came here for. I try, but I only come up with other things that keep slipping my mind: What was I supposed to buy at the grocery store, again? I must make that doctor appointment! And buy that gift for our friend’s kid’s birthday party!

My once-sharp mind keeps coming up blank. A year ago, when I was pregnant, I passed it off as pregnancy brain. After my daughter was born, I used the sleep-deprived, postpartum-brain-fog excuse. But now, I’m not so sure. Did having a baby do lasting damage to my brain? How long can I keep blaming hormones for my mental inadequacies?

Like over 80 percent of new mothers and soon-to-be moms, I chalk my forgetfulness up to “mommy brain” — a mental fog associated with pregnancy and the first few months of motherhood. Experts aren’t sure if the phenomenon is real, though. A 2014 study found that, while pregnant and postpartum women reported trouble remembering things, tests of memory and attention didn’t detect any differences between them and non-pregnant women. But Sasha Davies of Deakin University in Australia reached a different conclusion.

She and her team performed a meta-analysis, evaluating 20 studies that objectively measured cognitive differences between pregnant and non-pregnant women. The results, published in 2018 in the Medical Journal of Australia, revealed that compared with non-pregnant women, moms-to-be performed worse on tests of memory, attention and tasks such as planning and decision making, particularly in the third trimester.

But, Davies notes, the difference is not hugely detrimental. “It may be noticeable either to the women themselves or their partners,” she says. “But it shouldn’t be anything that’s going to affect their day-to-day functioning on a massive scale.”

This makes me question my memory lapses, because back in college I thought I remembered how, at least in rats, the opposite is true: Motherhood makes rats smarter, allowing them to better care for their young. But maybe my memory has gotten so bad that I’ve been misremembering.

To figure out if I have indeed been misremembering, I call up Kelly Lambert, a neuroscientist at the University of Richmond who studied the maternal brain with my college professor, the late Craig Kinsley. She assures me that what I remembered is true: Mama rats, who give birth to litters of up to 14 pups, have better memory, not worse. They’re also better at catching prey and display less of the rodent-typical anxiety about wandering into open areas to find food — important qualities for moms with so many mouths to feed.

Lambert brings up the idea that the difference between rodent and human studies may come down to what researchers ask these mothers to do. For rats, the task is often to remember where food is hidden. Human studies, on the other hand, often ask participants to memorize a list to test their recall. “Maybe we need more tests where we’re seeing how fast moms can shop in the grocery store or something like that, as opposed to memorizing vocabulary words,” says Lambert. “That’s just not at the top of the list when you’ve got a baby.”

Instead, the top priority is the baby. The shift from selfish singleton to selfless parent is dramatic, especially in rodents. Before a female rat becomes pregnant, the smells and sounds of pups repulse her. As soon as she gives birth, though, her newborns become her obsession. Given the choice between being with her babies or having free access to cocaine, she’ll pick her pups — at least until they’re big enough to hold their own. Plus, a brain region associated with addiction — the nucleus accumbens — is more activated by her pups than it is by the addictive drug. “It never ceases to amaze me that this shift has happened where [mother rats] are more interested in and almost addicted to another animal,” says Lambert.

I wonder if that’s my problem. I feel like I’m hooked on my daughter; it’s hard to focus on work or other tasks because I’m busy thinking about her, her needs, and if I’m doing this Mommy thing right. Could my brain have undergone some kind of switch, too? Could it be helping me tackle the new responsibilities of motherhood?

In 2010, a study in Behavioral Neuroscience of human moms found that, between roughly three weeks and three months postpartum, certain brain regions grew. These changes happened in areas like the parietal lobes, involved in processing touch and sight; midbrain areas such as the hypothalamus, which helps regulate hormones, and the amygdala, which is associated with emotions and survival instincts; and the prefrontal cortex, key in high-level thinking such as planning and decision making. All are regions involved in caring for an infant.

That same study also found that mothers who perceived their babies more positively at 3 weeks old (using words like “perfect” and “special” to describe them) had the greatest increases in these areas at 3 months. These boosts in brain volume, the authors write, suggest that a mother’s feelings toward her baby may facilitate the brain’s adaptations. However, whether mom’s feelings affect her brain volume or vice versa remains unknown.

But while some brain areas grow, others shrink. A 2016 study in Nature Neuroscience examined brain images of 25 women before and after their first pregnancies. It found that, compared with pre-pregnancy, some regions — primarily those involved in understanding other people’s emotions and intention — were smaller postpartum, and they stayed that way for at least two years. The difference was so striking that a computer algorithm created for the study flawlessly predicted which women had babies and which didn’t. “I’ve never seen any data like this,” says Elseline Hoekzema, a neuroscientist at Leiden University and the lead author of the paper.

This long-lasting decrease isn’t necessarily bad news, as a smaller size doesn’t always mean loss of function. In fact, in Hoekzema’s study, moms who scored higher on tests of attachment to their child had greater reductions in these regions. So this shrinkage may mean unnecessary connections between neurons are pruned away in these brain areas and they become more specialized and efficient— similar to pruning that takes place in the brain during adolescence.

I guess my brain really has changed since becoming a mom, then. And I’m not wrong to blame my favorite pregnancy scapegoat — hormones. “The hormone fluxes of pregnancy are simply so massive that they must change the brain,” says Hoekzema. In her study, she also found that the brains of fathers weren’t affected, suggesting the changes aren’t just from the experience of becoming a parent. (See below for what happens to the paternal brain.)

Hoekzema also found that motherhood reduced the volume of the hippocampus, an area important for memory. By two years postpartum, this reduction had partially recovered to normal levels, providing both a possible explanation for memory problems and a hope that they resolve, as other studies have reported.

What About Daddy Brain?

My husband, even in his most sleep-deprived state, never complained about “daddy brain.” But, although fathers’ memories seem unaffected, their brains change in other ways.

Levels of the hormone testosterone decrease within the first month of fatherhood, and dads who spend more time with kids have lower levels of the hormone, according to a 2011 study in the journal PNAS. Though men might think of the drop as a knock to their manliness, it can be a good thing. In families in which fathers have higher levels of testosterone, mothers report more marital dissatisfaction and spousal aggression. So it seems the dip is evidence that male brains adapt for parenthood to help support their family.

And just like in moms, dads see growth in brain regions involved in parental motivation. But moms’ and dads’ brains respond to parenthood differently. In a 2014 study comparing brain activation between new moms and dads, mothers had more activity in regions that process emotions, while fathers, who are usually secondary caregivers, showed more activation in regions involved in understanding and empathy. Fathers who are more active in caregiving, and especially those who are primary caregivers, however, showed activation in both networks, revealing that an active role in parenting shapes the brain.

Men naturally see a gradual decline in levels of the sex hormone testosterone with age. But those who have children are more likely to have lower levels of the hormone than men without children. Dads are also likely to see bigger drops in testosterone levels when they have newborns (babies 1 month or younger). (Credit: Alison Mackey/Discover. Source: "Longitudinal evidence that fatherhood decreases testosterone in human males," PNAS, 2011)

I do feel like my memory has improved since those early postpartum weeks, but my ability to focus still suffers. I doubt that will change anytime soon. There will always be more worries and things to keep track of with a child. But it’s nice to know my brain is adapting to meet the challenge. Especially when it feels like just that, a challenge, Lambert suggests mothers take a step back and consider all the new responsibilities they are juggling. “Moms are kind of super beings,” she says.

As I’m sitting in my home office trying (and failing) to focus on writing this piece, my daughter comes in to give me an unexpected hug: a reminder that this distraction is a pretty wonderful one. “Pregnancy and motherhood changes you forever,” says Hoekzema. That’s not a bad thing.