Magnetism: From Neuroscience to Climate Change? 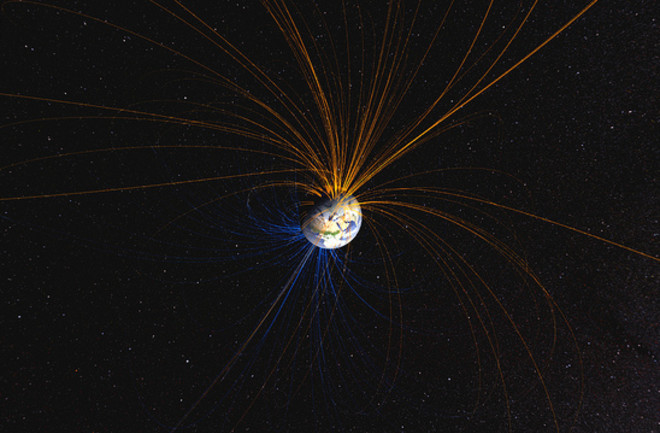 A few weeks ago, a pair of Canadian scientists, David Vares and Michael Persinger, published a paper concluding that climate change is not caused by carbon dioxide (CO2) emissions from burning fossil fuels, as most people believe.

Instead, they say, global warming and the rise in CO2 are both caused by decreases in the strength of the earth’s magnetic field: Earth’s Diminishing Magnetic Dipole Moment is Driving Global Carbon Dioxide Levels and Global Warming.

Why is a neuroscience blogger like me writing about a climate science paper? Because the senior author, Michael Persinger, is a well-known neuroscientist.

Persinger is a professor at Laurentian University in Canada. He’s perhaps best known for this researches in the field of “neurotheology“, the study of the neural basis of religious experiences. Much of his work has focussed on magnetic phenomena and their influence on the brain.

In the new paper, Vares and Persinger report a correlation between the strength of the earth’s magnetic dipole moment, atmospheric CO2, and global temperatures.

Then again, this is just a correlation, and correlation is not causation. A correlation exists between CO2 levels and any other variable which has increased or decreased since 1980, such as, say, the average ticket price at American cinemas. It seems unlikely that movie tickets affect the atmosphere directly.

To provide a direct causal link between the diminishing of the earth’s magnetic field and increasing atmospheric CO2 levels, Vares and Persinger cite a 2008 paper that found that magnetism affects the solubility of CO2 in water. With a weaker field, CO2 would become less soluble in the oceans and some would be released into atmosphere.

However, as John Mashey (who brought this paper to my attention) pointed out to me, the cited 2008 paper explicitly rejects the idea that geomagnetism can explain global warming (although acknowledging that it might exacerbate it):

The magnitude of the [geomagnetic-CO2] mechanism is small compared to the magnitude of the preponderant mechanisms driving the exchange of carbon between ocean and atmosphere, such as water temperature, biological pumping, overturning circulation… it would be preposterous to make the weakening Earth’s magnetic field responsible for global warming.

Vares and Persinger go on to say that although CO2 is rising, this in itself“does not cause global warming”. Instead, they say that the change in energy associated with the Earth’s changing magnetic field “translates into an equivalent temperature” and this may relate to climate change.

However, I believe there is a serious error in their calculation here. Vares and Persinger write (my emphasis) that

If the CO2 increases into the atmosphere from the sea water because of the diminished magnetic field are associated with the increased temperature, then that energy should translate into an equivalent temperature. Applying the classic definition that 4.18 J is required to increase 1 cc (10^−6 m3) of water 1˚C at standard temperature and pressure (STP), then the total energy within the 5.1 x 10^18 m3 will be 2.1 x 10^13 J.

With 1.72 x 10^13 J equivalence available from the change, the analogous temperature shift will be 1.2˚C. This implies that there is an equilibrium system by which the removal of the source energy is related quantifiably to the increase or decrease of the two connected variables. Thus, the equivalent value of the 1.2˚C would be reflected in the increase due to the release of CO2.

So I believe that the proposed “equivalence” between the amount of energy provided by the Earth’s magnetic field, and the amount of energy needed to cause global warming, is an error. Global temperatures have in fact risen by a bit less than 1 ˚C since 1970. If I’m right, the change in magnetic energy would in fact only heat the oceans by 0.0000000000012 ˚C, not 1.2˚C as Vares and Persinger state.

I’m not a climate scientist, but this seems to me like a problem for the attempt to suggest a causal link to underlie the correlation that Vares and Persinger report.

Dr Persinger made the following comments in response to a draft of this post:

Vares and Persinger agree that correlation is not necessarily causation. The latter can only be discerned by direct experimentation. That “correlation is not causation” can be applied to any discipline of science, from medicine to geophysics. However when correlations are extraordinarily strong such as the relationship between downward global magnetic dipole drift and upward global carbon dioxide and water temperature new interpretations can be examined quantitatively.

The energy associated with a diminished ~2.9 microTesla within the space occupied by the 5.1·1018 m3 within 10 km of ocean calculates to be 1.7 x 10^13 Joules. For comparison Knox and Douglass (International Journal of Geosciences, 2010, 1, 99-101) showed that the earth’s global warming trend was between 0.09 Watts per meter squared to 0.63 Watts per meter squared. When applied over the surface of the terrestrial oceans the values are 10^13 Joules per second to 10^15 Joules per second.  This is the same range as our calculations and suggests but does not prove that the loss of energy from diminished magnetic dipole may be contributing to the increased global warming trend.

Calculations for specific quantities of water require that the numbers of seconds elapsed during the decades of the diminished dipole must be multiplied by the diminished dipole energy. There within lies the test of the validity of the contribution of the warming trend. The original paper can be found in the International Journal of Geosciences, 2015, 6, 846-852. Vares and Persinger have provided insights to a working manuscript where the important component of any correlation, time, is investigated.