Magnetic Nanoparticles In The Brain and MRI

A new paper in the unconventional journal Medical Hypotheses raises concerns that MRI brain scans could be harmful. E. Z. Meilikhov of the Moscow Institute of Physics and Technology proposes that the powerful static magnetic fields inside an MRI scanner could exert force on tiny particles of the iron-containing mineral magnetite within the brain. These nanoparticles, being magnetic, could move and rotate in the MRI's magnetic field and even be forced inside neurons, he says:

20 years ago J.L. Kirschvink established (Ref)... the existence of ferromagnetic inclusions in human brain tissues. Electron microscopy and diffraction along with the element analysis showed that those are magnetite nanocrystals Fe3O4... with typical sizes of 10 - 200 nm (nanometers)... They are likely natural products of biomineralization and dispersed uniformly within all cerebral lobes, cerebellum, basal ganglia and midbrain.

These particles are tiny but, says Meilikhov, the larger ones might be big enough to cause damage to neurons:

These ferromagnetic granules are situated in the inter-cell brain space. With their high magnetic moment, they could experience strong mechanical forces and/or mechanical moments under external magnetic field. As a result, they would tend to move or turn, having an effect on the neighboring brain elements (neurons, ganglion cells, axons, etc.) 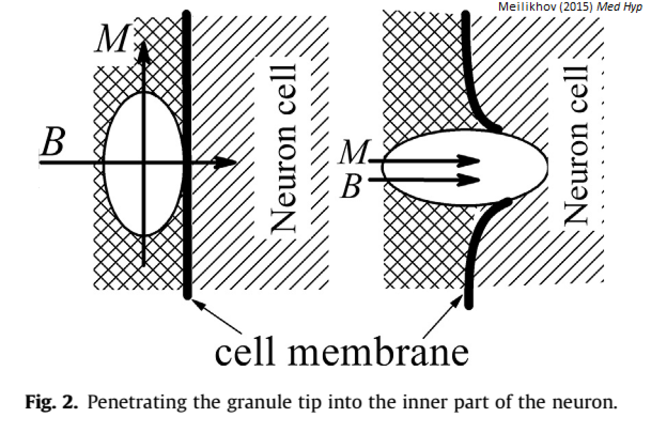 After a series of calculations to show that the forces generated by a rotating nanocrystal in an MRI scanner would be sufficient to penetrate a cell membrane. Could cause damage? Meilikhov says that we don't know:

We think that the only serious conclusion which might be drawn from physical estimates of the present work is the urgent appeal to the careful experimental analysis of the issue.

I'm not sure what to make of this paper. The fact that it's just one guy's back-of-the-envelope calculation (published in Medical Hypotheses) makes me inclined to discard it, but the argument makes intuitive sense. If the brain contains magnetic nanoparticles - and some studies have disputed this - then it's possible they could interact harmfully with MRI. MRI is regarded as safe except in people with certain kinds of metallic implants such as pacemakers. I've had maybe a dozen MRI scans and I'd be happy to have lots more, even after reading this paper. Nonetheless it would be nice to know more about this.