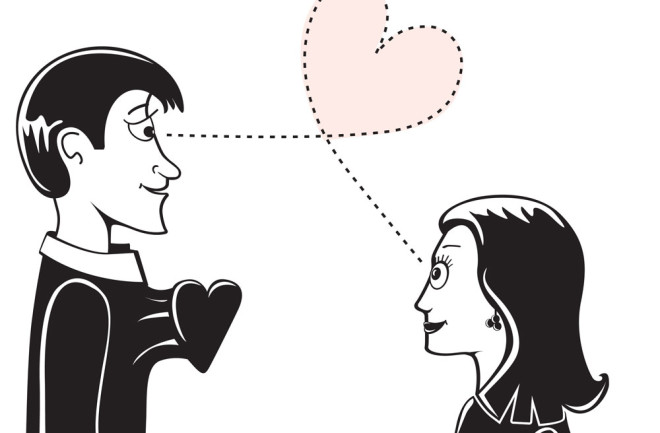 Psychologist Florian Zsok and colleagues from the University of Groningen in the Netherlands recently published a study that found even though people generally do believe they’re experiencing love at first sight (LAFS), the event has more to do with physical attraction than actual feelings of love.

Zsok and his team set up various experiments to answer some questions: Is LAFS actually happening in the moment, or is it something people remember only after they’ve fallen for someone? How does physical attraction affect LAFS? Does LAFS differ from love reported in romantic relationships?

To get their answers, the group recruited nearly 400 adults, mostly women, mostly heterosexual and mostly Dutch or German students. One group of volunteers filled out a survey about themselves and how they felt about their current partner, if they had one. Then, those same participants were shown, based on sexual preference, images of strangers and asked to imagine meeting them at a speed dating event. Afterward, they filled out another questionnaire — but with the people from the images in mind.

This time, participants rated how much they agreed with statements like, “I feel that this person and I were meant for each other,” and “I am experiencing love at first sight with this person.” It also asked them to rate the attractiveness of each potential partner on a scale of one (not at all) to five (very much).

The rest of the volunteers, all of whom reported being single, went to face-to-face soirees where they first met each other either in small groups or as part of a speed dating event. Again, the participants filled out the questionnaire that probed how they felt about their potential partners.

Ultimately, out of the nearly 500 meetings Zosk and his team studied, 49 of those resulted in someone reporting LAFS, supporting the idea the phenomenon isn’t just something people conveniently remember once they’re in a relationship. Sadly, in this study, there were no reports of reciprocal LAFS — womp, womp.

There was a common theme, though: People who reported LAFS often rated their date as more physically attractive than the rest of the volunteers. They also tended to score lower on questions measuring love than did people who reported being in a relationship, suggesting there is a difference between the two.

And, interestingly, people in relationships who claimed they’d experienced LAFS with their current partners were more likely to report feelings of passion (I wish I knew how to quit you!) than those who said they didn’t experience LAFS with their partners.

In all, this study might burst a lot of people’s bubbles. But, as they say, nothing in science is ever proven. So maybe there’s still hope out there for the hopeless romantics.

More From Discover
Mind
Your Next Therapist Could Be a Chatbot App
Mind
Mental Health Problems Increase In Millennials and Gen Z, New Study Reports
Mind
Conversations With Strangers Are Often More Enjoyable Than We Expect
Mind
Finding the Right Messaging: Reverse Psychology and Reactance
Mind
5 Rare Mental Conditions You May Not Know About
Mind
Determining the Origin of Our Moral Compass
Recommendations From Our Store
My Science ShopDiscover STEM Kits
My Science ShopDiscover 2022 Calendar
My Science ShopStrange Science
My Science ShopElements Flashcards
Shop Now
Stay Curious
Join
Our List