Lots of Cases of Synesthesia Are Based on Alphabet Magnets 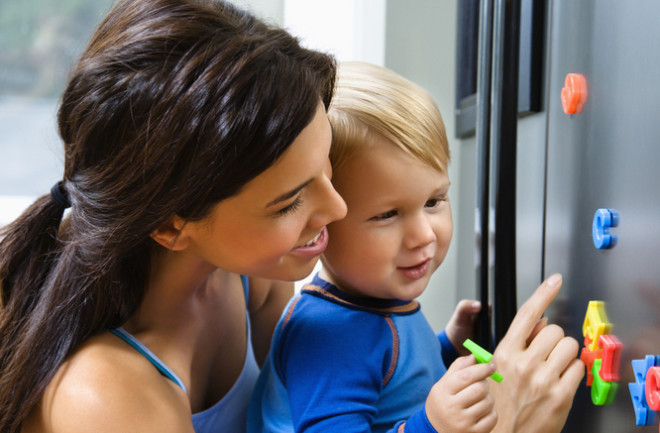 They are a ubiquitous childhood toy: alphabet fridge magnets. You may remember some from your own childhood, though they probably weren’t your most beloved of games.

But for some people, especially those growing up in the late 70s or 80s, one particular set left a deep impression — it forever changed the colors they associate with letters. That’s the conclusion of a new study on synesthesia, a condition where sensory stimuli overlap.

The study finds that more than 6 percent of American synesthetes have color associations that match a particular Fisher-Price fridge magnet set. And that finding will force scientists to rethink how synesthesia works.

Roughly 1 in 10,000 people have synesthesia, but these estimates are rough at best. In synesthetes the stimulation of one sense activates another — think of smelling color or tasting words. It’s thought that the most common form is grapheme-synesthesia, or linking letters with colors. (To test if you’re a synesthete, click here.)

Although the first description of synesthesia dates back to ancient Greece, researchers still don’t know what causes some people to perceive two senses at the same time. Previous studies have shown that, surprisingly, it may be a learned association: a certain Fisher-Price alphabet magnet set manufactured from 1971-1990 directly maps onto some adult synesthetes’ color associations. In the current study, researchers wanted to see just how widespread this similarity was.

The child with the hood on in this photo was born in 1988 and is an adult synesthete. His color-letter pairings matched 25 of the 26 letters in the Fischer-Price magnet set, which is in the foreground. Courtesy: Witthoft et al

The child with the hood on in this photo was born in 1988 and is an adult synesthete. His color-letter pairings matched 25 of the 26 letters in the Fischer-Price magnet set, which is in the foreground. Courtesy: Witthoft et al

Researchers put 6,588 synesthetes from around the United States through a series of online tasks to test their color-letter perception. The test first required participants to consistently match letters with colors. The second test presented participants with letters in various colors, and they had to accurately say whether the colors matched their previous pairings.

True synesthetes passed these tests with flying colors, and researchers noticed something interesting: 400 of the participants, or over 6 percent, had letter-color pairings that matched the letters from the Fisher-Price magnet set. The proportion was even higher — 15 percent — for participants born during the toy’s peak popularity, from 1975 to 1980. In one case, a participant born in 1988 matched 25 of 26 of his letter-color pairings to the set. Researchers published their study Wednesday in the journal PLOS One.

In their study, researchers are careful to separate their findings from the underlying causes of synesthesia. Their results don’t indicate that playing with Fisher-Price letters leads to the development of synesthesia, or that synesthesia can be learned. Rather, people who already have the condition, or are predisposed to it, seem to incorporate cues from their environment to shape their individual letter-color pairings.

Further, other forms of synesthesia may not operate the same way. For example, people who can taste sound may construct their taste-sound pairings internally rather than from external cues.

Regardless, this study shows that there’s a lot more happening during playtime than meets the eye — and further deepens the interesting science of synesthesia.