Yesterday, I read a paper that, to my mind, embodies what's wrong with cognitive neuroscience: Changes in the Amygdala Produced by Viewing Strabismic Eyes 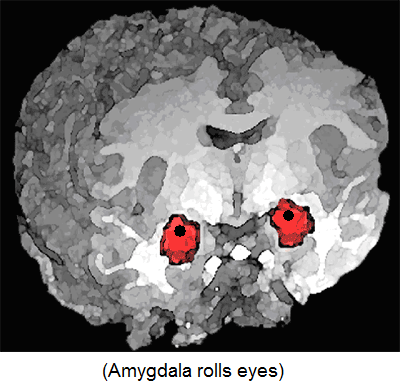 I have no wish to attack the authors of the piece. This post is rather unfair on them: their paper is no worse than a hundred others, it's just a clear case of a widespread disease. My own research over the years has certainly not been immune. So I'm not claiming to be without sin, but equally, someone has to cast the first stone at the elephant in the room. First a summary. The authors showed 31 volunteers two sets of photos, all of which focused on the eye region of human faces. Half of the pictures showed people with healthy eyes, while half featured eyes suffering from strabismus (aka "cross-eye" or "walleye"), a defect in which the two eyes are not aligned properly, and seem to point in the wrong directions. All this took place in an MRI scanner, where the volunteers' neural activation was measured using fMRI. The results showed that looking at strabismus caused increased brain activity, compared to normal eyes, in areas such as the amygdala, hippocampus and fusiform gyrus. Interpreting this finding, the authors write:

Because the amygdala is the fundamental structure in the processing of negative, fearful, and aversive emotions, the results of this study strongly suggest that healthy individuals are reacting in a negative fashion to strabismus.

This sentence reveals a philosophical confusion. Firstly, the premise that amygdala activation = negative emotion, is a serious oversimplification. The amygdala is activated by almost any emotionally meaningful stimulus, compared to an unemotional baseline. While it's true that it is most strongly activated by negative stimuli, amygdala activation just cannot be read as being negative. It might be positive, or just surprising. This is an example of the dangers of reverse inference - trying to infer psychological events from neural activations. It's a very common problem in fMRI. As is also very common, the authors selectively draw conclusions from those areas of the brain that most readily fit their theory. The hippocampus was activated more strongly than the amygdala, but this area is less 'emotional', so is hardly discussed. So the papers' conclusion, that healthy individuals react in a negative fashion to strabismus, doesn't follow from the fMRI data. However, the conclusion is true anyway, because, look:

Which looks better? A glance at those pictures tells you more about how strabismus is perceived than any amount of brain scanning. 'How do people react to strabismus?' is a psychological question, not a neurobiological one. I'm sure the photo on the left does activate the negative emotion circuits of the brain (whatever they are) more than the one on the right. But I know that because I know its psychological effects, not the other way around. Now, 30 out of the 31 volunteers' amygdalae lit up in response to the strabismus images, but only 23 of them reported feeling an emotional response on a questionnaire. The authors note this, and suggest that the 'missing' 7 people might have denied feeling anything in an effort to be politically correct. This is the popular argument that when brain and behaviour seem to disagree, 'the neural data is more sensitive' - it can reveal what behaviour conceals. But what if it's just less specific? That's not talked about. So this paper tells us nothing about strabismus. However, it might change the way we think about strabismus. The authors write:

This study demonstrates for the first time the organic effect of strabismus on the observer... Strabismus correction surgery can improve quality of life by improving interpersonal relationships by virtue of its organic effect on both parties.

The implication is that other people's aversion is as much an 'organic' feature of strabismus as the misaligned eyeball itself. One that only surgery can correct. Maybe it is, but these data don't tell us. It might be (say) that the unpleasantness we feel is aversion to the unknown, and if our society were only better educated about strabismus, we'd be more comfortable with it. There are lots of other possibilities. Talking about something in a neurobiological way sends the message that this is a neurobiological issue. In this way, many fMRI papers serve to spread the idea that this is an issue that only neuroscience can solve and, therefore, create a demand for more fMRI studies. The authors of this paper are victims of this mentality, a widespread confusion about whatneuroscience is for. fMRI is a great way to approach neuroscientific questions. It's a bad (and terribly expensive) way to do psychology. This study is about psychology, and should not have involved an MRI scanner.