Via Dormivigilia, I came across a fascinating paper about a man who suffered from a severe lack of monoamine neurotransmitters (dopamine, serotonin etc.) as a result of a genetic mutation: Sleep and Rhythm Consequences of a Genetically Induced Loss of Serotonin 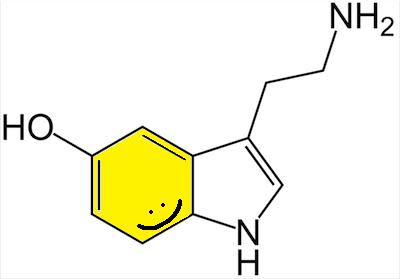 Neuroskeptic readers will be familiar with monoamines. They’re psychiatrists’ favourite neurotransmitters, and are hence very popular amongst psych drug manufacturers. In particular, it’s widely believed that serotonin is the brain’s “happy chemical” and that clinical depression is caused by low serotonin while antidepressants work by boosting it.

Critics charge that there is no evidence for any of this. My own opinion is that it’scomplicated, but that while there’s certainly no simple relation between serotonin, antidepressants and mood, they are linked in some way. It’s all rather mysterious, but then, the functions of serotonin in general are; despite 50 years of research, it’s probably the least understood neurotransmitter.

The new paper adds to the mystery, but also provides some important new data. Leu-Semenescu et al report on the case of a 28 year old man, with consanguineous parents, who suffers from a rare genetic disorder, sepiapterin reductase deficiency (SRD). SRD patients lack an enzyme which is involved, indirectly, in the production of the monoamines serotonin and dopamine, and also melatonin and noradrenaline which are produced from these two. SRD causes a severe (but not total) deficiency of these neurotransmitters.

The most obvious symptoms of SRD are related to the lack of dopamine, and include poor coordination and weakness, very similar to Parkinson’s Disease. An interesting feature of SRD is that these symptoms are mild in the morning, worsen during the day, and improve with sleep. Such diurnal variation is also a hallmark of severe depression, although in depression it’s usually the other way around (better in the evening).

The patient reported on in this paper suffered Parkinsonian symptoms from birth, until he was diagnosed with dystonia at age 5 and started on L-dopa to boost his dopamine levels. This immediately and dramatically reversed the problems.

But his serotonin synthesis was still impaired, although doctors didn’t realize this until age 27. As a result, Leu-Semenescu et al say, he suffered from a range of other, non-dopamine-related symptoms. These included increased appetite – he ate constantly, and was moderately obese – mild cognitive impairment, and disrupted sleep:

After doctors did a genetic test and diagnosed SRD, they treated him with 5HTP, a precursor to serotonin. The patient’s sleep cycle immediately normalized, his appetite was reduced and his concentration and cognitive function improved (although that may have been because he was less tired). Here’s his before and after hypnogram 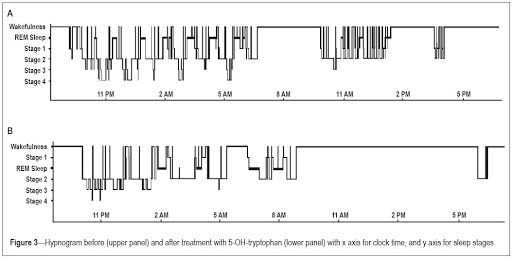 Disruptions in sleep cycle and appetite are likewise common in clinical depression. The direction of the changes in depression varies: loss of appetite is common in the most severe “melancholic” depression, while increased appetite is seen in many other people.

For sleep, both daytime sleepiness and night-time insomnia, especially waking up too early, can occur in depression. The most interesting parallel here is that people with depression often show a faster onset of REM (dreaming) sleep, which was also seen in this patient before 5HTP treatment. However, it’s not clear what was due to serotonin and what was due to melatonin because melatonin is known to regulate sleep.

Overall, though, the biggest finding here was a non-finding: this patient wasn’t depressed, despite having much reduced serotonin levels. This is further evidence that serotonin isn’t the “happy chemical” in any simple sense.

On the other hand, the similarities between his symptoms and some of the symptoms of depression suggest that serotonin is doing something in that disorder. This fits with existing evidence from tryptophan depletion studies showing that low serotonin doesn’t cause depression in most people, but does re-activate symptoms in people with a history of the disease. As I said, it’s complicated…