Last week, a young radiation biologist by the name of Benjamin J Hayempourwas featured on the blog Retraction Watch. Hayempour had just had a paper retracted for its 'unexplained close similarity' to another paper - a phrase that many people would consider a euphemism for 'plagiarism'. Plagiarism is so common that it's a bit boring. If one plagiarized paper had been all there was to the story, Retraction Watch might not have run it; it certainly wouldn't have got much traffic. However, Hayempour went and made the story at lot more interesting - by having his lawyer threaten Retraction Watch with a lawsuit. This was probably the worst move he could possibly have made. Within hours, a mob of readers had trawled Hayempour's other publications and uncovered numerous other "close similarities". Instead of one retraction, he might well end up with several. And I'm happy to join this mob, because it's important to send a message to Hayempour and those like him: if you try to get lawyers involved, the gloves are off. There are lots of people who might not care about what you did, but they care a great deal about your trying to hide it. Any sympathy you might otherwise have enjoyed will be gone. On that note, I've been looking over a Hayempour paper from 2013 about brain scans and schizophrenia. I've discovered unexplained close similarity with a paper from McGuire et al (2007) in Trends in Pharmacological Sciences. For starters, there's an identical Figure (!)

Actually, it's not quite the same. Hayempour's version includes some crudely-placed red lettering. McGuire et al's caption appears verbatim in the main text of Hayempour's paper: 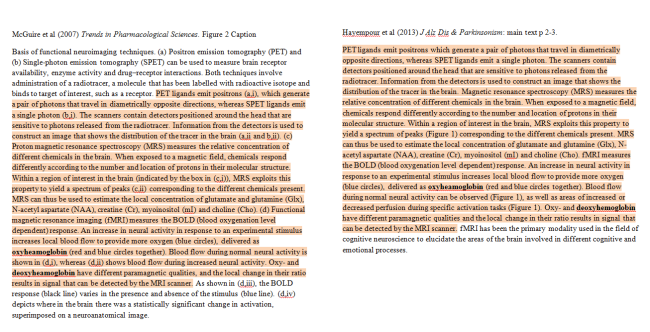 The passage even contains a classic plagiarism 'smoking gun'. McGuire et al twice misspelled "haemoglobin" as "heamoglobin"... and so did Hayempour et al. There's more. There is a passage beginning "take uncompetitive antagonists..." which is 140 words long and almost identical in both papers. See also "Molecular neuroimaging studies permit...", "Molecular imaging studies in schizophrenia are consistent...". And so on. I also found unexplained close textual similarities to this 2010 paper by Meyer-Lindenberg e.g. the passage "Neuroimaging has been useful in defining...", and others. Hayempour et al do cite McGuire et al and Meyer-Lindenberg, but they nowhere acknowledge having (seemingly) taken a figure, and hundreds of words verbatim, from them. I have reported this to the Journal of Alzheimer's Disease And Parkinsonism - we'll see what they have to say. UPDATE 14th December 2013: After this post went up, Hayempour began to engage in the discussion in the comments over at Retraction Watch, where he admits to having made some mistakes, but defends other aspects of his published work. UPDATE #212th January 2014: In the aftermath of this post, I entered into a correspondence with Hayempour. He has made corrections to the J Alz Dis Parkinsonism paper I scrutinized, enclosing some of the copied text in quotes with attribution, and rewriting other sections. The revised PDF, which is here, no longer contains unexplained similarities as far as I can see. Regarding the lawyer who threatened Retraction Watch, Hayempour asked me to include this statement from him:

Not only do I cherish and admire the scientific method, but I advocate for true transparency in biomedical research. A specific reporter was given information and decided to bend the story to his own liking. Even after all members involved wrote countless emails to him that he is publishing a story which didn't reflect the true state of events, he refused to comply. Consequently, upon being threatened by the ability of this journalist to bend the truth in order to serve himself with a better story, our group hired an attorney. Scientific transparency is key in medical progress, and it is an ethical pillar I stand by throughout my work. We had been portrayed as attempting to hire attorneys to cover our story, when nothing could be further from the truth. We always have been and will be widely accessible to peer comments and critiques so that we may grow as a scientific community. I believe that the underlying truth is always revealed, and it is very clear to all scientists and researchers involved that the journalist with an agenda refused to report the honest facts. Lawyers and attorneys aside , I am optimistic that as an honest biomedical community we will continue to work diligently in producing the best work we can, and we will use the criticisms and suggestions of our scientific colleagues - and not dishonest journalism - to improve the quality of our work.

UPDATE #3 13th January 2014: Ivan Oransky of Retraction Watch made the following comment in response to Hayempour's statement from yesterday:

I'm glad to see that Hayempour has corrected the "unexplained similarities" in the paper Neuroskeptic analyzed, although best practices dictate that the article be marked as corrected, with an explanation of why. That's absent, as far as I can see. However, his statement misrepresents events in a significant way that makes other claims in it meaningless: "Even after all members involved wrote countless emails to him that he is publishing a story which didn’t reflect the true state of events, he refused to comply. Consequently, upon being threatened by the ability of this journalist to bend the truth in order to serve himself with a better story, our group hired an attorney." Hayempour claims to have hired an attorney after "countless emails" saying were were "publishing a story which didn’t reflect the true state of events." But as our post shows, his attorney threatened to sue us before we had even posted anything. In fact, the legal threat included this:"Please refer to this letter as specific notice of our law firm’s intent to pursue legal action against you if you do not cease and desist correspondence with members of the Group." So not only was Hayempour trying to keep us from publishing the story, he was trying to keep us from even reporting on it before publishing. "We had been portrayed as attempting to hire attorneys to cover our story, when nothing could be further from the truth." he writes in his new statement. That's contradicted by facts, and by Hayempour's own comment on our post. As far as those "countless emails," there were indeed a lot of them, but at no point did Hayempour or any of his colleagues identify any alleged factual inaccuracies in the post. (The exception was Hayempour's claim that he was misquoted, which we noted in the post along with the fact that it isn't true.) We offered them the same opportunity to write comments on the post that we offer everyone.