Learn to Juggle, Rewire Your Brain 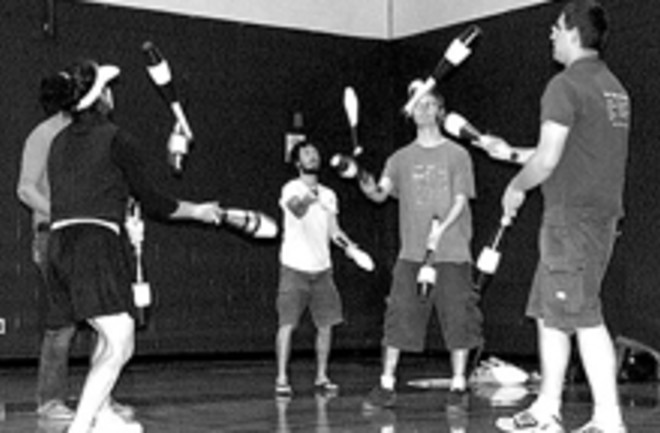 Inside the brain of someone who's learning to juggle, some interesting changes take place. Researchers used MRI scans to study the brains of people before and after a six-week training course in juggling, and

say they saw a 5% increase in white matter - the cabling network of the brain [BBC News].

The study, published in Nature Neuroscience, follows up on previous work that found changes in the more famous gray matter of the brain, which consists of the cell bodies of the neurons where processing and computation take place. The white matter, which consists mostly of the axons that stretch away from the cell bodies, can be thought of as the brain's wiring, and researchers say this is the first time that changes have been observed in the white matter of a healthy adult. Says lead researcher Heidi Johansen-Berg:

"We tend to think of the brain as being static, or even beginning to degenerate, once we reach adulthood.... In fact we find the structure of the brain is ripe for change. We've shown that it is possible for the brain to condition its own wiring system to operate more efficiently" [Reuters].

The changes to the jugglers' brains were found in a rear section called the intraparietal sulcus, which has

been shown to contain nerves that react to us reaching and grasping for objects in our peripheral vision. There was a great variation in the ability of the volunteers to juggle but all of them showed changes in white matter [BBC News].

This demonstrates that the brain growth is a result of the time spent training, and isn't linked to skill level. The researchers also note that juggling isn't the only activity that could produce such changes--Johansen-Berg says she chose juggling simply because it was a complex task for people to learn. Related Content: 80beats: Play Tetris, Get a More Efficient & Thicker Brain 80beats: Heightened by Halo: First-Person Video Games Are Good for Your Vision DISCOVER: Circus Science