Where do budding, even experienced, science-fiction writers learn about the science behind the science fiction? Going back to school and getting a university degree in a scientific discipline is an option, but that's going to take quite a while. You could short-circuit the process by spending a week at Launch Pad at the University of Wyoming! 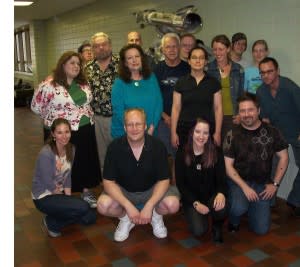 Launch Pad is a free, NASA-funded workshop for established writers held in beautiful high-altitude Laramie, Wyoming. Launch Pad aims to provide a “crash course” for the attendees in modern astronomy science through guest lectures, and observation through the University of Wyoming’s professional telescopes.

The workshop's mission is to:

...teach writers of all types about modern science, primarily astronomy, and in turn reach their audiences. We hope to both educate the public and reach the next generation of scientists.

The person who runs Launch Pad, Mike Brotherton, is a wizard at using sci-fi as a vehicle to teach actual science (or, in his own words, he's a wizard at funding his own science-fiction habit). A few years ago he received NSF funding to compile "Diamonds in the Sky" -- an anthology of hard science-fiction stories that also can be used by physics and astronomy teachers as a vehicle to teach real science. Some of the stories are quite good and worth the read. Perhaps we'll see "Diamonds in the Sky II" in the not-too-distant future, populated with stories from former Launch Pad attendees! Launch Pad 2011 and 2012 are funded, and there's still time to apply for next year!