"Know Thyself" Is A Lot To Ask

I've written before about the limitations of self-report measures in psychiatry. 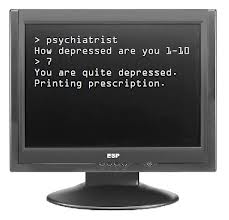 It's an issue that's been recognized fordecades but, unfortunately, self-report seems to be more popular than ever. I suspect that this is because it's far and away the easiest and cheapest way of getting data, and hence publications, in a great many fields of science. Now a new study has examined patients who'd suffered head injuries, strokes, brain lesions and other neuropsychological issues. It found that people who felt worse rated themselves as suffering from more symptoms as a result of their brain injury, but this perception was only weakly related to their actual cognitive abilities. Over 2000 cases were included. Everyone was measured in three ways: a set of

to measure how well people did on tasks dealing with memory, perception, cognition and so forth, all things that can be impaired by brain injury. There was also a self-report measure of mental impairment - how badly peoplereported they were suffering from cognitive deficits. Finally, there was a measure of self-reported emotional issues. The results showed clearly that self-reported functional difficulties were only slightly correlated with the objective tests (r=0.18), but were very strongly linked to emotional problems (r=0.65). In other words, it was how happy people were, rather than how impaired they were, that determined their self-reports of impairment. But let's think about this more closely. Can we even trust self-reports of emotional states? If emotions can color our perceptions of our lives, why can't they do so for our reports of emotions themselves? As I've said before in a more philosophical context...

It’s not clear that we have any special insight into our own emotions, beyond that which is available to others. We tend to assume that we do... but feeling an emotion and understanding it are entirely separate... we all interpret our feelings in various ways, and like any act of interpretation, we can be either right or wrong. Suppose I love you and I think “I love you”. In that case I’m right. But I could love you and think I don’t (maybe I think it’s just lust), or then again I could not love you (it is just lust) but think that I do. Any combination of feelings and thoughts is possible. The notion that our mind is a single monolithic thing, and that we know everything that’s in our own mind, is a stubborn one, but quite misleading. In fact we know very little about what goes on in our own heads; 100 billion cells are firing all the time, and we’re not aware of any of them. Sometimes we can achieve self-knowledge, but it is never guaranteed.

Until relatively recently, the idea that you could trust self-reports in psychiatry, especially, was rejected out of hand. A basic assumption of psychoanalysis is that one's conscious self-knowledge is untrustworthy and that only through a difficult process of work can the truth be uncovered. Unfortunately, this sensible idea was generally lost beneath a whole aggregation of dodgy notions about dream interpretation, Oedipus complexes, and symbolic penises.