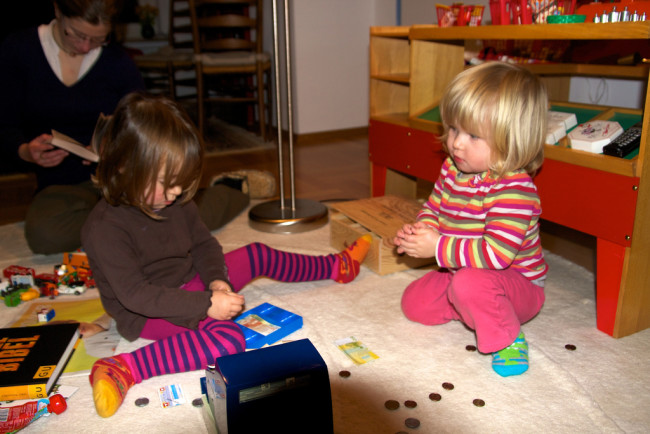 Kids are natural scientists, it turns out. In an article published last week in Science, psychologist Alison Gopnik

the literature about the way young children learn, and she finds that the way preschoolers play is very similar to the way scientists do experiments: Kids come up with general principles, akin to scientific theories, based on the data of their daily lives. Gopnik argues that the research should steer educators and policy makers away from more-regimented, dogmatic kinds of preschool instruction. Scientists have known for a while---as do most new parents---that babies and small children are phenomenally quick on the uptake. Little ones spend most of their time systematically exploring the world through trial and error, and they grasp what seem like complex concepts very quickly. Babies, we know, have an intuitive grasp of probability: In one experiment

, researchers showed babies a box filled mostly with white balls and a few red ones, then drew out a sample of balls and showed it to the baby. If the sample was mostly red balls, the baby looked longer at it than if it were mostly white balls. The infant knew that drawing several red balls out of the bin was unlikely, and therefore noteworthy. Toddlers, multiple

, can test hypotheses about how machines work---for example, they can figure out which blocks made a machine play when some but not all blocks trigger the toy. We have to be careful, though. This exploratory, quasi-scientific approach to the world doesn't last if adults teach kids to do something else: Kids will let adult instruction override their natural curiosity. Gopnik cites an experiment in which a teacher bumped into a toy and made it squeak, as if by accident, then left the kid alone to play with the toy. The child made the toy squeak, but also figured out several other things about it. When the teacher said, "Here is my toy," and then made the toy squeak, the child left alone with the plaything only imitated what the teacher had done. Researchers titled the paper about the squeaky-toy experiment "The Double-Edged Sword of Pedagogy."

After the "lesson," the kids ended up learning less about the toy than they would have if left to simply play. All this research, Gopnik concludes, argues against adding more instruction to preschool curricula. Let the little scientists play and the world will teach them what they want to know.