Jerry Coyne On The Adaptive Significance of Semen Flavor 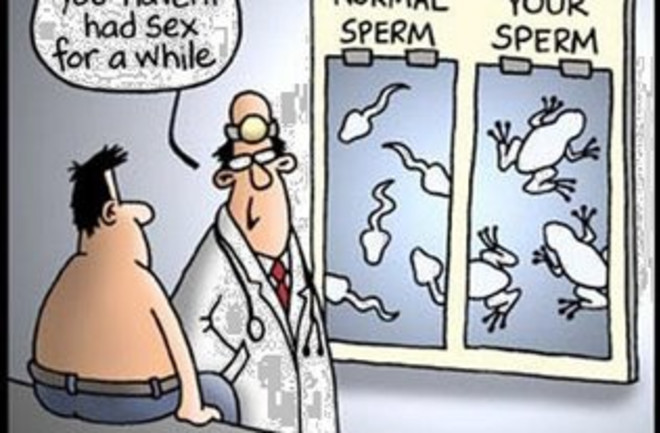 I head west for a couple days and Chris up and creates a commotion… Of course he’s absolutely correct to do so.  Coyne is entitled to his perspective, but in no way does he speak for science.  But since we’re on the topic of Jerry Coyne, it’s good reason to bring up another idea of his that hit my radar recently. Readers know I’m exploring science and sexuality for my next book, and earlier this month I received several emails alerting me when Coyne shared his theory about the adaptive significance of semen flavor.

I’ll admit I was a bit surprised when the post hit my inbox, but since we’re reading Bonk, it’s an appropriate subject and one I have not considered before. Coyne took an informal poll by enlisting Dr. Fawzia Rasheed to ask her female acquaintances:

Sperm…would you spit or swallow? In other words, can you abide by or do you hate the taste?

Here are the results reported:

There were sixteen responses, many including pungent asides that I cannot repeat on a family-oriented website. One answer was a non-response (”I should be so lucky”). The other fifteen included eleven “spits” and four “swallows”. But among the latter, two women commented that they did not like the taste: one, in fact, swallowed to get rid of the flavor as quickly as possible. Two others said “swallow” but did not comment on whether they enjoyed it. Therefore, 13/15, or 87% of informative respondents could not abide the taste of semen.

Coyne goes on with his theory:

Natural selection maintains the repugnant taste of semen so that a man’s sperm will wind up in the appropriate place: the vagina and not the stomach. So long as sperm tastes bad, women will not be tempted to swallow it, but will turn their male partner towards conventional intercourse, which of course is the only act that will produce children. In other words, any male with good-tasting sperm would have fewer offspring than his competitors. A man whose sperm tasted like honey would probably not have any children at all.

Perhaps.  But, I suspect there’s more going on with both this poll and the evolutionary significance of semen flavor. First, there are social norms and cultural mores for our behavior and receptivity to sexual activities.  Also, there’s no question that bitterness is influenced by diet and the flavor is subject to a recipient’s individual preferences.  It’s also possible taste provides females with valuable information about the health of her partner and potential fitness of future offspring if they couple.  And then I’m highly suspect of the mode of inquiry for this particular poll and the degree to which Dr. Rasheed’s acquaintances felt comfortable responding to Coyne’s question.  Were they aware it would be reported back to him and do they know Coyne personally?  Is Rasheed a close girlfriend and confidant or possibly their graduate advisor?  I also expect that arguably the most significant influencing factor is the level intimacy in the relationship between people involved in the, errr… transaction.

While Coyne offers two impossible ways to test his idea, let’s just say that I have trouble swallowing the hypothesis.