Is Ultrasonic Brain Stimulation The Future?

A paper just out in Nature Neuroscience proposes a new tool for neuroscientists who want to stimulate the brain - ultrasound. There are already a number of established ways of modulating human brain activity. As neuronal firing is essentially electrical, most of these methods rely on electricity - such as TDCS - or on magnetic fields, which induce electrical currents - as in TMS. Now Virginia Tech researchers Wynn Legon and colleagues say that a very different approach, ultrasound, could be the next big thing: Transcranial focused ultrasound modulates the activity of primary somatosensory cortex in humans Ultrasound for neurostimulation is not an entirely new idea. It's been shown to work in cell cultures and in animals, but this is the first attempt in humans. The idea is simple: focus a beam of sound waves at a very high frequency (500 kHz, about 25 times too high for humans to hear) through the skull and into the brain. This, we are told, modulates neuronal firing - although it's not clear quite how. Legon et al write:

The pulsed acoustic pressure wave may locally shift the balance of excitation and inhibition by acting on mechanically sensitive components of the brain, including cell membranes, ion channels and synaptic vesicle cycles (1). Our physiological observations suggest that ultrasound transiently shifts the balance of neuronal activity in favor of local inhibition...

Legon et al used a pulsed 500 ms burst of 500 kHz ultrasound via a generator placed in contact with the scalp. What's remarkable about this stimulation was how selective it was. Simulations, based on acoustic data, predict that the beam was just a few millimeters wide, and a few centimetres long, even after penetrating the skull: 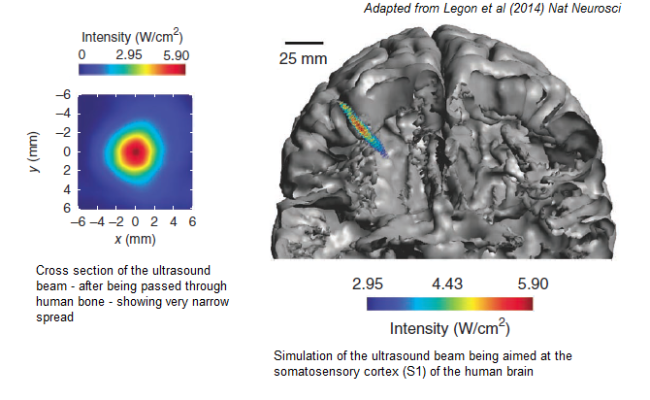 This tight localization could make ultrasound very attractive to neuroscientists. Other neurostimulation methods are rather sloppy. If ultrasound gives us the power to zap a cylinder of cortex roughly the size of your little finger, that would be incredible. But what exactly did a poke from this sonic finger do? Well... it was rather subtle. Legon et al say that the ultrasound 'modulated' neural activity; when they aimed the beam at the somatosensory cortex (area S1), which is responsible for touch sensation, it altered (on average) the evoked response potential (ERP) generated in the S1 cortex in response to a touch stimulus: statistically significant differences were found at two time points (grey shading.) 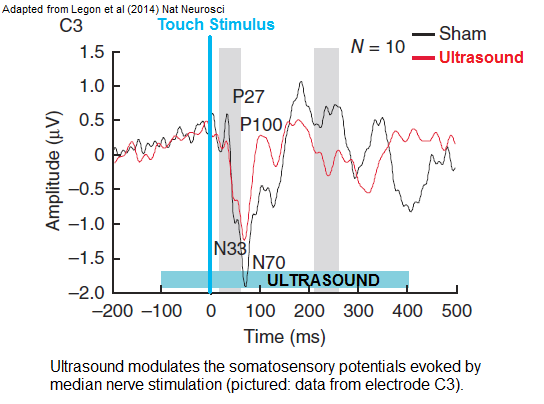 The ultrasound also improved subject's ability to perceive the difference between two different tactile stimuli, suggesting that the modulation of touch-evoked brain responses was actually beneficial. This is really interesting. However, the authors say that none of the volunteers actually felt any effects of the stimulation. This is in stark contrast to TMS, which is generally an unmistakable experience because, amongst other things, it stimulates the nerves in the head. Not much fun, but at least there's no doubt that it's doing something... Is it safe? The authors issue a note of caution to anyone planning to muck about with the technique:

Ultrasound at high intensities or during long exposures can cause irreversible tissue damage, like any energy source, so caution should be used when implementing it to modulate brain activity.

However, they say that ultrasound of the intensity they used has no known harmful effects on tissue, and that the energy involved is far below the official safe limits for ultrasonic imaging:

Ultrasound has not caused tissue damage in studies implementing its nonthermal bioeffects to modulate neuronal activity at acoustic intensities below those recommended for safe use in diagnostic imaging.

Still, I wonder who was the brave soul who volunteered to be the very first human guinea pig...