Is There Such a Thing As Universal Humor?

A comedian, a psychiatrist and a yoga instructor weigh in. 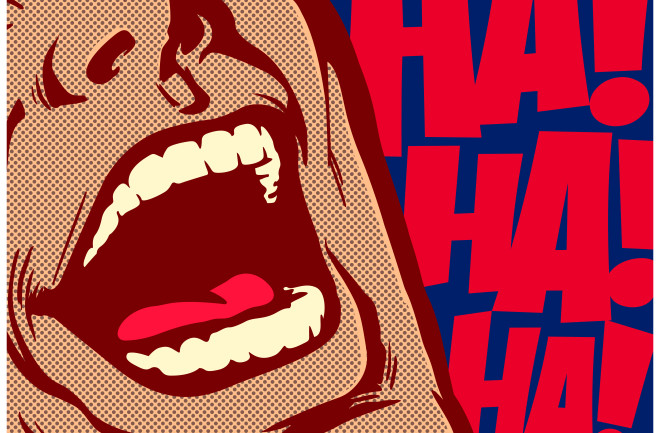 Humor is a necessary part of our existence: It lightens our mental burdens and helps us connect to others. But is it possible to make everyone laugh with the same joke? Studies show cultural differences play a significant role in how individuals value humor. For example, people living in east Asian countries are less likely to see comedy as a coping mechanism compared to Westerners. Yet the science also supports the concept that humor is beneficial to the mental health of anyone whether the person lives in Utah or Hubei. Where the research seems to fall short, however, is in identifying exactly what type of humor would be appreciated by all — or most. Perhaps it doesn't exist? For a robust discussion on the topic, we spoke with three individuals whose daily lives revolve around humor in various ways. Here is what they had to say.

Lauren Goldin's approach to humor is not based on cracking jokes but stems from a sense of whimsy. The Jersey City resident is a certified laughter yoga instructor and gets a group giggling through absurd movements and childlike play.

During a session, participants might warm up with deep breaths and laugh on the exhale. If the class is meeting in person, class members will shake hands or wave at each other and laugh while making eye contact. In online classes, Goldin has participants do things like get close to the screen and pretend to smear lipstick on their faces. Other activities may include student's making binoculars with their hands and laughing as they peek through at their peers or “electric shock laughter” where participants touch pointer fingers with another and back away quickly pretending to get shocked.

The laughter may begin as a simple response to an instruction but turns genuine as the group members respond to its contagious nature.

“It's largely the feel-good hormones coursing through our veins and it heavily relates to the ego — we're testing it,” Goldin says. “What we're doing is absurd; we're grown adults who are acting like children.”

Laughter yoga was developed in 1995 by a doctor and a yoga teacher — a husband and wife team — who were inspired by laughter's health benefits and wanted more ways to bring it to the masses.

Goldin herself has been practicing this form of yoga since 2018 and views the lighthearted fun as the true form of universal humor — where things like age, race, sexuality or even language don't matter.

“Watching standup comedy in Japanese would be pointless for me — I don’t understand a word of it,” Goldin says. “But I’ve done laughter yoga broadcast from Japan on Zoom and laughed until my abs were sore.”

Through the work week David Michael uses his communications degree to help others perfect their public speaking skills. The weekends, however, are devoted to his comedy. And, really, he says, the two go hand in hand.

“I bill myself as an audience expert,” he says. “Comedians are naturally communicators from the stage, they work at the highest level of public speaking.”

Michael has been performing comedy since the 1980s and regularly travels to different venues all across the country to perform for a variety of audiences. He's also been featured on A&E's Comedy on the Road, wrote for Jay Leno's The Tonight Show in the early 1990s and even appeared in some movies such as Gung Ho in 1986 and, more recently, the 2012 Jack Reacher film alongside Tom Cruise.

Michael says engaging an audience requires two basic techniques. One is the concept of “edutainment” which relies on colorful presentations, puppets and other props to get ideas across, the other is making use of self-deprecation in your comedy because it allows others to relate to you. Michael says he sees this as universal humor at its core.

“When writing and performing humor universally, you really want to appeal to the audience’s good nature and finer things in life,” he says. “Making fun of yourself is an easy way to do that. People will either think to themselves 'I’m like this guy' or not but they will still laugh.”

A psychiatrist says it comes down to fart jokes

Brian Kaplan always had a lifelong interest in comedy, yet the London-based psychiatrist always just saw it as a hobby. That is until a 1996 news clipping altered his professional path. The story, sent from a psychotherapist friend, was about provocative therapy which relies on humor and reverse psychology to help patients address their issues from a different perspective. Kaplan went to a demonstration held by the the founder, Frank Farrelly, and was instantly impressed with his work.

“There was something more than just the humor of it, it was the love.” Kaplan says. “In other words, in order to get away with the humor of it you have to exude such love, such caring.”

Kaplan became a student of Farrelly's and followed him to different countries while practicing this form of therapy. Often a therapist's responses in this method would be deemed harsh or rude under normal context, which is why Kaplan always makes sure he has permission from his patients to practice it on them.

Examples of Kaplan's approach include one instance where Kaplan referred to a patient as a cockroach — not because she was disgusting but because she was tough. In another instance a patient disclosed that her troubles were leading her to drink a full bottle of wine every night. To which, Kaplan responded. “Oh, that's not too bad, if I had your life I'd drink two bottles a night.”

It's the unexpected humor from these statements that helps get patients out of the rut, putting them in a different mindset that allows them to see new solutions to their problems.

While Kaplan's work caters to the individual, he has given a lot of thought to universal humor. He's decided that a “fall from pomposity” would always be funny to anyone. For example, a pompous man in a suit slipping on a banana peel and falling into a pool. He also believes there is a universal appreciation for sex and bathroom-related humor. In part, because we spend so much of our time attempting to rise above basic bodily functions in our day to day interactions.

“We want to be spiritual and good people and we want to remind ourselves we are not animals,” Kaplan says. “Then someone farts or something and that's a total reminder that you're an animal. People love that.”