Is the Placebo Effect a Myth?

Taking a swipe at conventional wisdom, medical philosophers Asbj#248;rn Hróbjartsson and Peter Gøtzsche of the University of Copenhagen recently proclaimed the placebo effect— one of the best-known but least understood curative processes— a myth. After analyzing 114 placebo-controlled trials, they concluded that placebos are generally no more effective at relieving disease symptoms than no treatment at all. Now the attackers are under fire from placebo researchers who say the public is being misled.

"That article was a travesty," says neurobiologist Howard Fields of the University of California at San Francisco, who in the 1970s demonstrated that placebos appear to relieve pain by inducing the body to release opiates. A new study coauthored by neuroscientist Fabrizio Benedetti of the University of Turin Medical School in Italy bolsters this notion. Benedetti found that patients who were informed they were receiving an intravenous analgesic experienced more pain relief than those who received it automatically via an infusion machine. The painkiller's action was enhanced by the knowledge it was being given— a clear placebo effect. In a little-publicized portion of their paper, even Hróbjartsson and Gøtzsche concede that placebos can relieve pain.

Fields is especially irate that Hróbjartsson and Gøtzsche lumped together disparate trials, some of which found a placebo effect, some of which did not. In effect, the trials cancelled each other out. Why, then, have reporters rushed to embrace their results? Benedetti blames a reluctance to accept the power of the mind. "It is a sort of sigh of relief: 'Aah, we knew medicines were real and not the result of some psychological stuff.' " 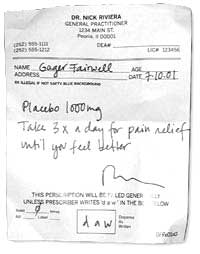