Is Marijuana Really a Gateway Drug? 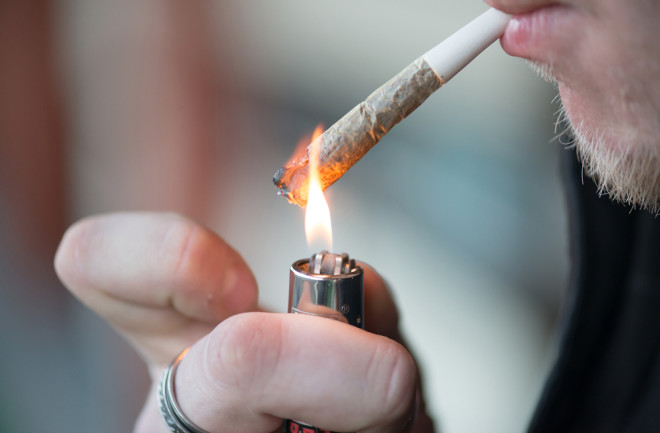 This article originally appeared on FactCheck.org.

Chris Christie recently said that marijuana is a “gateway drug” while arguing for enforcement of its federal status as an illegal substance. Though there are correlations between marijuana use and other drugs, there is no conclusive evidence that one actually causes the other.

The science on this topic is far from settled. The “gateway hypothesis” or theory refers to the idea that one substance — marijuana, in this case — leads users to subsequently use and/or abuse other drugs. If Christie’s point is simply that the use of marijuana tends to precede the use of other drugs, then he is correct — but that’s not the whole story.

Though studies of large populations of people have indeed found that those who smoke marijuana are more likely to use other drugs, these studies show a correlation without showing causation — a commonly misunderstood phenomenon in science.

In short, just because marijuana smokers might be more likely to later use, say, cocaine, does not imply that using marijuana causes one to use cocaine.

A 1999 report from the Institute of Medicine, which is part of the National Academy of Sciences, laid out this issue clearly (see pages 100-101): “In the sense that marijuana use typically precedes rather than follows initiation into the use of other illicit drugs, it is indeed a gateway drug.

However, it does not appear to be a gateway drug to the extent that it is the cause or even that it is the most significant predictor of serious drug abuse; that is, care must be taken not to attribute cause to association.”

We spoke with several experts and reviewed the available scientific literature on gateway theory. Christie’s definitive statement is unsupported by evidence — there is some evidence in favor of a gateway effect, but the scientific community shares no consensus on the issue and there is little evidence on the underlying cause of that effect.

Importantly, there are two distinct ways in which marijuana or other drugs might act as a gateway: biological or pharmacological reasons why marijuana would lead to other drugs (sometimes known as the “stepping stone” theory); and social or cultural reasons for the jump from one drug to another. In the case of the first idea, some research has found plausible biological ways in which marijuana — and, notably, nicotine and alcohol — could “prime” the brain and make one more likely to abuse other drugs, but this research is largely in rats and is not conclusive.

For example, in one study published in 2007 in the journal Neuropsychopharmacology, researchers treated some adolescent rats with THC, the main active compound in marijuana. The rats were then given the opportunity to “self-administer” heroin as adults. The THC-treated rats consistently increased their heroin usage, while those rats that had not been treated with THC maintained a steady level of heroin intake.

Notably though, these findings are not unique to marijuana. Nicotine and alcohol, two other drugs that are widely available to young people and are often among the first drugs used, have been found to have similar effects in animal studies.

Biology of Drug Use

We do have some hints of biological gateway effects in humans, though, from studies involving twins. One such study, which was published in the Journal of the American Medical Association in 2003, and involved 311 twin pairs “discordant” for early marijuana use — that is, one of each set of twins had used marijuana before the age of 17, and the other had not. The twin that did use marijuana early in life had between a 2.1- and 5.2-times higher risk of other drug use, alcohol dependence, and drug abuse/dependence than their sibling. This means that associations between marijuana use and later drug use can’t be explained by genetic factors, and gives support to the gateway theory.

But even this leaves a lot of unanswered questions, according to Susan Weiss, the associate director for scientific affairs at the National Institute on Drug Abuse, which is part of the National Institutes of Health. “Did marijuana change that twin and make them more likely to use other drugs? What was it about that one twin that made them use marijuana while the other twin didn’t?

We don’t know the answer to that. Did he happen to have friends that were more deviant? It’s very difficult to completely interpret these things; most likely there is probably some convergence of factors.

Some researchers, though, think there is almost certainly a causal link — it’s just not clear what it is. David Fergusson is a professor at the University of Otago in Christchurch, New Zealand, and he has been leading the Christchurch Health and Development Study, a 35-year, ongoing look at 1,265 New Zealanders born in 1977. Several papers on drug use and the gateway effect have emerged from this study.

“There is a very strong association between the use of cannabis in adolescence and subsequent use of other illicit drugs,” Fergusson told us in an email. He said that one analysis from his study published in the journal Addiction used a statistical test that “clearly suggest the existence of some kind of causative association in which the use of cannabis increases the likelihood that the user will go on to use other illicit drugs... Where things get murky is in the area of the nature of the causal processes.”

Another possible contributor to those processes is simply the availability of a given drug that might lead it to be used first, rather than any particular biological reason for moving from one to another. A large international collaboration produced a study published in the journal Drug and Alcohol Dependence in 2010 that looked at patterns of drug use across 17 countries. The study found that “with few exceptions, substances earlier in the ‘gateway’ sequence predicted drug use later in the sequence.”

That finding, though, differed in strength across countries. That study also provides a hint that marijuana’s illegal status may contribute to its gateway effects. The mechanism here is simple: accessing one illegal drug simply means a marijuana user would be more likely to have access to other illegal drugs, through social interactions and the act of actually buying the drug.

The Drug and Alcohol Dependence study found that marijuana use was less strongly associated with other illicit drug use in the Netherlands, where marijuana can legally be purchased in so-called coffee shops, than in other countries including the United States.

Up in the Air

Weiss, of NIDA, said that scientifically a gateway effect cannot be ruled out, but a conclusive “yes” is also not possible at this point.

“The scientific community is still arguing about it,” she told us. “It really is a complicated thing to tease out. It has been very contentious over the years. And I don’t know how useful it is as a concept, but it’s something that people latch on to.”

Christie is entitled to his opinions on the legality of marijuana and the statutes in Washington and Colorado, and he is right that marijuana use “typically precedes” the use of other illegal drugs, as the Institute of Medicine report said. But there is no firm ground to stand on when making claims of the drug’s gateway effect.