Can food be addictive? Is obesity sometimes a form of substance abuse? 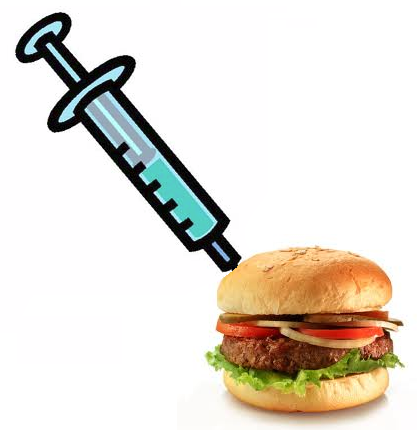 In a new paper, neuroscientist and Director of the National Institute on Drug Abuse, Nora Volkow, muses on 'The Addictive Dimensionality of Obesity' Volkow and her coauthors start out with a disclaimer - "we do not claim that obesity is the result of food addiction" - but despite this, they go on to argue that the two conditions have an awful lot in common. The key to both afflictions, we're told, is the neurotransmitter dopamine -

The phenomenological and neurobiological overlaps between obesity and addiction can be predicted on the basis that drugs of abuse tap into the same neuronal mechanisms that modulate the motivation and drive to seek and consume food... brain dopamine pathways play central roles in obesity and also in addiction...

It's dopamine that makes both drugs and food fun -

Drugs of abuse work by activating the dopamine reward circuit, which, if chronic, in vulnerable individuals, can result in addiction. Certain foods, particularly those rich in sugars and fat, are also potently rewarding and can trigger addictive like behaviors in laboratory animals and humans... [likewise] the ingestion of palatable food releases dopamine in the striatum, in proportion to the ratings of meal pleasantness, and activates reward circuitry.

But there can be too much of a good thing. Overindulgence makes the dopamine, and the enjoyment, wear off. Users then consume more and more, to chase the high -

Both addicted and obese subjects [compared to non-addicts / to thin people] exhibit less activation of reward circuits when given the drug or the palatable food, respectively... it was suggested that blunted dopamine activation by consumption (of drug or food) could trigger overconsumption to compensate for the blunted response of the reward circuit.

And it goes on in this vein. Volkow et al's is a good paper as far as it goes. It's an interesting and accessible review of the relevant literature. The dopamine theory of addiction is extremely popular today, and this article is a fine statement of it. Leaving aside the question of how true this is, what worries me is the implications of this idea. If you view addiction as essentially about reward (pleasure), surely that means that anything pleasurable could also be addictive? Or to put it another way, if you're saying that addiction is the direct consequence of over-indulgence in a reward, then aren't you saying that rewarditself is ultimately what's addictive? After all, drugs and food aren't the only rewarding things. Indeed, according to Volkow et al, everything good in life is a reward and they all act on dopamine. Here's what the authors call a 'bow-tie diagram' which I think is a nice illustration of their approach (and its limitations): 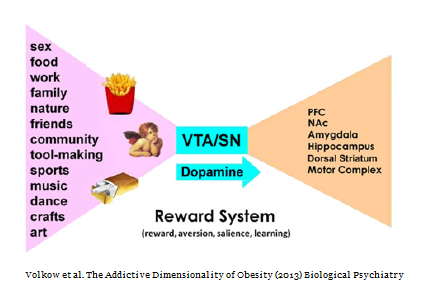 If everything from food to friends to music are rewarding because they trigger dopamine release, then surely all of those things could be 'addictive'. If 'reward' is essentially monolithic, and the various kinds of rewards differ only in how powerful they are, then everything's addictive to a degree. The more fun, the more (potentially) addictive. The better something is, the worse it is. This seems to me to be the logical conclusion of this approach to addiction. Let's call this (very widespread) approach neuropuritanism. The funny thing is that this idea - for all its medical, neurobiological, scientific language - actually undermines the concept of addiction as a 'disease' and reduces it to what amounts to a moralfailing - it casts addiction as over-indulgence. The Sin of Gluttony, if you will.