Inception: Rarely Is Getting Your Mind So Messed With So Fun 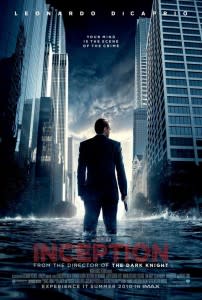 You’ve been running for hours, chased by a crazed grizzly bear. Suddenly you lose your footing, and you’re balancing on the edge of a cliff. Your stomach lurches as gravity pulls you down. Instantly you’re jolted awake and find yourself teetering precariously over the edge of your bed in your New York apartment. You’ve been asleep for just 5 minutes. Like me (or whoever I stole that bizarre-o dream about the crazed grizzly from), everyone has dreams that strangely intertwine with reality. That’s what makes Chris Nolan’s newest thriller, Inception, so fun to watch. It plays with ideas we’ve all experienced—how dreams can reveal our most guarded memories, feel like days when only hours have passed, or affect our emotions when we wake up. Inception’s Leonardo DiCaprio plays Dom Cobb, a man trained in the art of stealing personal info using a process called dream sharing. He builds the world of a dream, brings his subject into that world, and guides events so he can extract needed information, or plant a life-altering idea. Cobb is charged with creating a dream to convince Robert Fischer, the son of a multi-billionaire businessman, to use his inheritance to build his own company. To do this, Cobb and his crew induce an incredibly deep sleep, and enter a dream, within a dream, within a dream, and at one point (I think) within another dream. Sure, busting into dreams and planting very specific ideas in someone’s mind is pretty far removed from even the most leading-edge brain science, but Nolan got the basic idea right: Neuroscientists say sleep plays an important role in memory consolidation. While we’re sleeping (or perhaps dreaming), our long-term memories stabilize deep in our hippocampuses. If someone were to plant a memory in a dream, who knows how long it would persist. As the plot develops, the dreams are so realistic that it becomes challenging for the characters—and audience—to distinguish the dream state from reality. But that’s all part of the game, drawing us in as we attempt to sift fact from fiction. The film’s cinematographer, Wally Pfister, told me that in his earliest conversations about the film with Nolan, the director said “Remember, this is a dream world. When you’re in a dream, it feels real and you want to believe it’s real." This warped reality triggers some moments of confusion (as you try to keep track of which dreamscape you’re in, and how actions in one realm affect the others) but by the end my brain had adjusted to the scheme. I emerged from the theater into a chatty crowd—some firing questions excitedly at their neighbors or calling friends to announce how confused they were, while others praised the film’s brilliance. Fans and critics alike, everyone was talking. —DISCOVER reporter/researcher Amy BarthYZPKT7YEG2K9