In the Brain, Acidity Means Anxiety

According to Mormon author and fruit grower “Dr” Robert O. Young, pretty much all diseases are caused by our bodies being too acidic. By adopting an “alkaline lifestyle” to raise your internal pH (lower pH being more acidic),you’ll find that

Wow. Important aspects of the alkaline lifestyle include eating plenty of the right sort of fruits and vegetables, ideally ones grown by Young, and taking plenty of nutritional supplements. These don’t come cheap, but when the payoff is being free of all diseases, who could complain?

Young calls his amazing theory the Alkavorian Approach™, aka the New Biology™. Almost everyone else calls it quack medicine and pseudoscience. Because it is quack medicine and pseudoscience. But a paper just published in Cell suggests an interesting role for pH in, of all things, anxiety and panic – The amygdala is a chemosensor that detects carbon dioxide and acidosis to elicit fear behavior.

The authors, Ziemann et al, were interested in a protein called Acid Sensing Ion Channel 1a, ASIC1a, which as the name suggests, is acid-sensitive. Nerve cells expressing ASIC1a are activated when the fluid around them becomes more acidic.

One of the most common causes of acidosis (a fall in body pH) is carbon dioxide, CO2. Breathing is how we get rid of the CO2 produced by our bodies; if breathing is impaired, for example during suffocation, CO2 levels rise, and pH falls as CO2 is converted to carbonic acid in the bloodstream.

In previous work, Ziemann et al found that the amygdala contains lots of ASIC1a. This is intriguing, because the amygdala is a brain region believed to be involved in fear, anxiety and panic, although it has other functions as well. It’s long been known that breathing air with added CO2 can trigger anxiety and panic, especially in people vulnerable to panic attacks.

What’s unclear is why this happens; various biological and psychological theories have been proposed. Ziemann et al set out to test the idea that ASIC1a in the amygdala mediates anxiety caused by CO2. 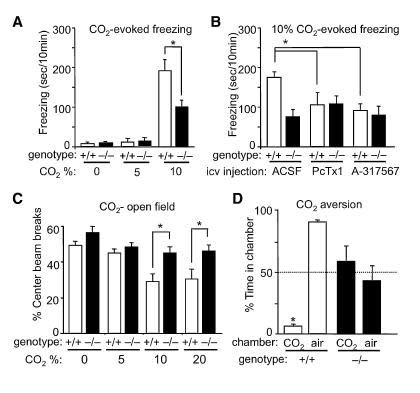 In a number of experiments they showed that mice genetically engineered have no ASIC1a (knockouts) were resistant to the anxiety-causing effects of air containing 10% or 20% CO2. Also, unlike normal mice, the knockouts were happy to enter a box with high CO2 levels – normal mice hated it. Injections of a weakly acidic liquid directly into the amygdala caused anxiety in normal mice, but not in the knockouts. 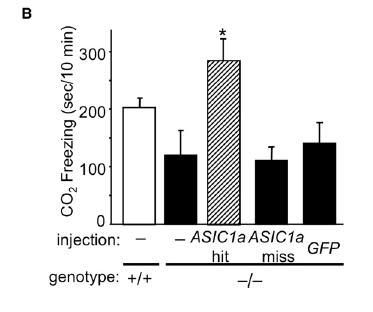 Most interestingly, they found that knockout mice could be made to fear CO2 by giving them ASIC1a in the amygdala. Knockouts injected in the amygdala with a virus containing ASIC1a DNA, which caused their cells to start producing the protein, showed anxiety (freezing behaviour) when breathing CO2. But it only worked if the virus was injected into the amygdala, not nearby regions.

This is a nice series of experiments which shows convincingly that ASIC1a mediates acidosis-related anxiety, at least in mice. What’s most interesting however is that it also seems to involved in other kinds of anxiety and fear. The ASIC1a knockout mice were slightly less anxious in general; injections of an alkaline solution prevented CO2-related anxiety, but also reduced anxiety caused by other scary things, such as the smell of a cat.

But this is, as they say, speculation. The link between CO2, pH and panic attacks seems more solid. As the authors of another recent paper put it