In Japan, Your Blood Type Could Get You Hired…Or Fired 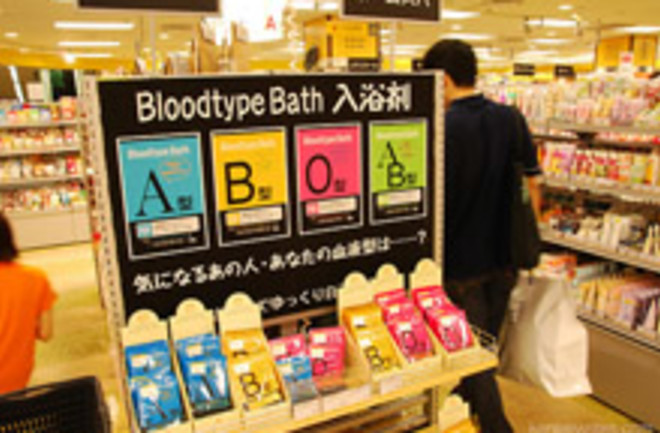 Does blood type really matter? If you’re Japanese, the answer, at least right now, is yes. The importance of blood type is so ingrained in Japanese culture that potential employers regularly ask about it during job interviews. There's also the Nintendo DS game that asks players their blood type to help them rediscover themselves, the Japanese department stores that sell “lucky bags” of women's accessories that are tailored to blood types, and a new dating show that lets women pick men based on whether they’re an A negative or B positive. Perhaps the biggest measure of the country’s obsession is in its books: Japan’s largest book distributor has reported that four out of the top ten books sold last year were on the ways a blood type determines a person’s personality. In the bestselling series, there’s one book for each of the blood types, which are categorized as follows:

1. As are perfectionists and overanxious.

2. Bs are cheerful, eccentric, and selfish.

3. Os are curious, generous, and stubborn.

4. ABs are artsy-fartsy, but totally mysterious and unpredictable.

Psychologist Satoru Kikuchi at Shinshu University argues that all this blood type hubbub is “sham science…the idea encourages people to judge others by their blood types…It’s like racism.” So is she right? As we’ve learned, blood type is determined by genes. And we know genes influence personality: As molecular biologist Dean Hamer told Time, “You have about as much choice in some aspects of your personality…as you do in the shape of your nose or the size of your feet." Still, just because your blood type is linked to your genes and your genes play a role in your personality, it doesn’t necessarily mean that blood type and personality are connected. So while the Japanese series probably makes for a good read, we’re gonna say that it’s safe to conclude that having AB blood doesn’t make you an artist, (though the phrase "Type A" must come from somewhere). Of course, there's always the chance that the personality traits are a self-fulfilling prophecy. Related Content: DISCOVER: The Future of Blood 80beats: Lab-Grown Blood I