After doing some much-needed research, cognitive scienctists are suggesting a new way to boost students’ lagging scores: Get rid of the hallowed (and stultifying) classroom lecture. 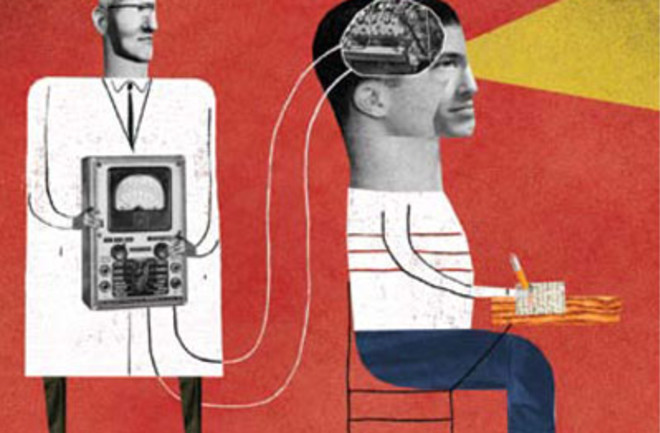 Teaching well is hard. I can cite my direct observations of the hundreds of victims of my occasional efforts over the years as a teacher of physics and writing. As I have stood lecturing brilliantly to a few dozen purportedly eager collegians, it has not escaped my attention that at any one time only three or four seem awake enough to keep up with their text messaging.

Clearly the problem is not the content or presentation style of my lecturing, which, as I may have neglected to mention, is brilliant, or so I was once assured by a student who stayed after class to ask for a sixth extension on an assignment. Then again, from what I recall of my college days, I wasn’t exactly on the edge of my seat at my professors’ lectures, either. And most of my fellow lecturers don’t report much different. Could the problem be with the nature of lecturing itself?

To find some answers, I posed this question directly to Carl Wieman, associate director for science at the Office of Science and Technology Policy at the White House. Wieman, to be blunt, knows zero. In fact, he won a Nobel Prize for his extraordinarily low achievement. During the mid-1990s in a University of Colorado physics lab, Wieman enlisted lasers to bring matter as close to absolute zero as anyone is likely to get—a temperature so low that atoms freeze together into quantum-mechanical clouds predicted by Einstein but never before observed. “That was challenging,” Wieman says. “But changing how people teach, that’s really hard.”

Wieman should know. Aside from having captained his share of undergraduate physics-for-poets courses, Wieman is now, in a sense, America’s First Science Teacher, in that President Obama took him on last year with the assignment of improving science education in America.

It’s no secret we’ve got some work to do along those lines. A widely accepted standardized test administered in 2009 to large samplings of high school students in industrialized countries found that U.S. students scored 23rd in science, with students from China scoring highest. The United States has long closed the knowledge gap in graduate school, where our programs still lead the world in the production of new scientific insights, as measured by publications in science journals. But a study by the Royal Society in the U.K. earlier this year reported that even in this regard China is on track to pull ahead of the United States as early as 2013.

Noting that his physics Ph.D. students were arriving from college woefully unprepared but went on to thrive in the lab-oriented atmosphere of grad school, Wieman suspected the problem might have its roots in that core teaching tool of the college experience, the undergraduate lecture. He unearthed some research to back up that hunch.

A University of Maryland study of undergraduates found that after a physics lecture by a well-regarded professor, almost no students could provide a specific answer to the question, “What was the lecture you just heard about?” A Kansas State University study found that after watching a video of a highly rated physics lecture, most students still incorrectly answered questions on the material. Wieman himself found that when he quizzed students about a fact he had presented 15 minutes earlier in a lecture, only 10 percent showed any sign of remembering it.

Investigating further, Wieman learned what cognitive scientists have proven repeatedly in recent years: Humans don’t learn concepts very well by having someone blab on about them. In other words, the college lecture is to a large extent a waste of time.

Graham Gibbs, former director of the Oxford Learning Center, which helps instructors improve their teaching skills, has been making that argument for three decades. In a landmark paper, “Twenty Terrible Reasons for Lecturing,” he points to “overwhelming” evidence that lectures are an ineffective way for universities to achieve the educational objectives they set. Academia continues to rely heavily on lectures, Gibbs argues, because professors are “overworked,” “ignorant,” and “don’t know how to design courses.”

The simple insight that lectures don’t work well raises two questions. First, where do I apply to get those 3,000 hours of my life back? And second, what does work? To demonstrate, Wieman and colleague Katherine Perkins put together a science-learning initiative at the University of Colorado. The next year he and his wife, Sarah Gilbert, then a physicist at the National Institute of Standards and Technology, created a second one at the University of British Columbia after the institution pledged $12 million over six years to the program.

In these test settings, various science curricula were revamped to get them to jibe with the latest cognitive science research on effective learning, which points to more interactive approaches that include immediately and repeatedly putting new information to use. Students in science courses were continually peppered with questions that they all had to answer via wireless handheld clickers. The students were frequently broken into small work groups to try their hands at solving problems using the material they had just learned, and they took at least two midterms each class.

The results have been eye opening. In a study published in the journal Science, one section of a University of British Columbia physics course about electromagnetic waves was taught by the cognitive approach, while another section was taught by the standard course lecture. The first group scored an average of 74 percent when tested on the material, while the second group scored only 41 percent. “We’ve been able to clearly demonstrate how much better we can do in teaching students,” Gilbert says.

But scientists who teach have proven reluctant to toss out the lecture, never mind the evidence that it doesn’t work. “They say this is the way it’s always been done, and it was good enough for them, so it’s good enough for their students,” Wieman says. Were this attitude to hold in medicine we would still be bloodletting, in physics we would be trying to reach the moon with very large rubber bands, and in economics we would still be suffering major worldwide financial crashes. (Well, physics and medicine are advancing, anyway.) Wieman is using his White House position to push universities to reward professors for the quality of their teaching, not just their research results.

At the University of Cambridge, cognitive researcher Michelle Ellefson is making her own bid to improve teaching by applying lessons from cognitive science. “Decades ago, we thought children’s brains functioned much like those of brain-damaged adults,” she says. In particular, younger brains seemed short on prefrontal cortex, the seat of so-called executive functions that, among other things, enable us to switch our attention from what we are learning now to something we learned earlier. That’s a problem in the classroom, where teachers tend to focus on one subject for several classes and then move on to another one, often causing students to lose touch with whatever knowledge they had just acquired.

But more recent research suggests that children who are struggling can readily improve their executive functions with appropriate stimulation. In other words, recalling old lessons is just a matter of training. Ellefson ran a study in which a group of students were briefly pushed every day to revisit earlier material, while another group just plowed ahead with the new material. “After eight weeks, the group that did daily reviews became just as good at switching back and forth between new and old material as adults are,” she says, adding that test scores jumped accordingly. “It’s a simple classroom change that can make a big difference.”

Such results come as no surprise to Kurt Fischer, who directs the Mind, Brain, and Education Program at Harvard University. The reason scientists are likely to turn up all sorts of simple new ways of dramatically improving classroom learning, he claims, is that until recently they haven’t bothered to look for them. “We have massive research programs in agriculture, meteorology—even the cosmetics industry is constantly researching,” he says. “But there hasn’t been much research in education. Now we’re starting to discover what techniques actually work.”

Which leaves me with a few new tricks to try out in my college class this semester. Hey, maybe the next time a light goes on in the eye of one of my students it won’t be merely the reflected glare of a text message.

David H. Freedman is a freelance journalist, author, and longtime contributor to DISCOVER. You can follow him on Twitter at dhfreedman.