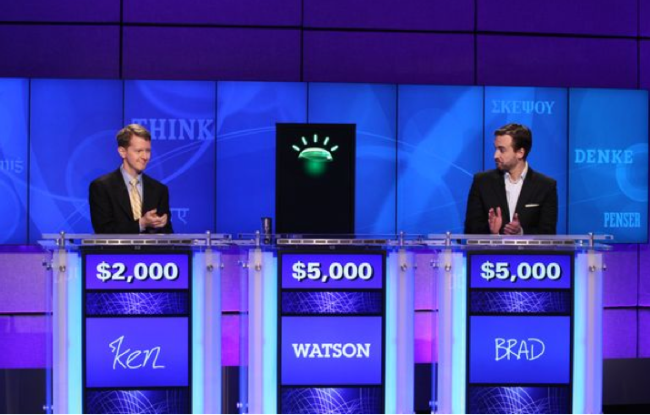 Was it just me, or was their something faintly bizarre about yesterday’s historical ass whooping of man by machine? Maybe it was Brad Rutter’s increasingly frantic swaying as Watson took his lead and asked for yet another clue in its stilted, strangely mis-timed way. Perhaps it was the effect of the last corporate stiff of the event – in front of a stone wall backdrop that seemed a parody of cheesy corporate décor – telling us where Watson’s winnings will go, all while speaking with a monotone that would make Al Gore jealous. Or maybe it was Alex Trebek’s nonchalance after the historic event as he immediately turned his attention to pitching the next day’s all-teen tournament. Somehow I expected balloons and confetti to descend from the ceiling, maybe with the voice of Hal in the background---“I’m sorry Ken, but you were really improving from your performance yesterday. Would you mind taking out the garbage?” The most important intelligence test of machine versus man in decades sails by with hardly the rattle of a plastic fern.

Besides the very impressive technical achievement of Watson, IBM should be congratulated for managing to turn three episodes of Jeopardy! into a three-episode-long infomercial for their brand. We saw breathless executives tell us how Watson was a real game-changer for medicine, genomics, and spiky hairdos for avatars. We saw the lead engineers puzzling over mathematical squiggles written on staggered layers of sliding glass panels (something we’ve seen in an Intel commercial

before when it was necessary for a visual joke to work, and so obviously useless for doing real work that it seems an insult to viewers in this context). The overall feel of the event was highly corporate. Alex Trebek channeled Mikael Blomquist’s obsessiveness over computer model names as he explained how Watson’s brain was a massive cluster composed of several cabinets of IBM Power 750 Servers. I wondered how many takes it took for him to get the spiel down. Amidst the heavily rehearsed corporate messaging, we did get some nuggets of interesting information, like how Watson was initially dumb to gender before, as one of the researchers put it, “it got the gender module.” I’m fairly confident this came in the form of a small cheesecloth bag of genetically modified goat genitalia inserted into the head node of the aforementioned Power Server cluster. February 16, 2011, will go down in history as the date of a very important milestone in artificial intelligence. As I blogged about earlier

, in reaching a machine with the kind of intelligence we want, having goal posts that are at points short of that is extremely helpful, and The Jeopardy Test seems to fit the bill. Beating the human Jeopardy-savants on Wednesday was at turns dramatic and eerie. I think IBM has a major achievement on its hands. I just wish the whole thing had been done with a bit more of a sense of humor, and a bit less gratuitous corporate messaging.