If We Discover Alien Life, Will Humanity Keep Its Cool?

Informing the masses that everything they’ve been told is wrong, after all, could result in a social upheaval that tears society apart, at least the thinking goes. 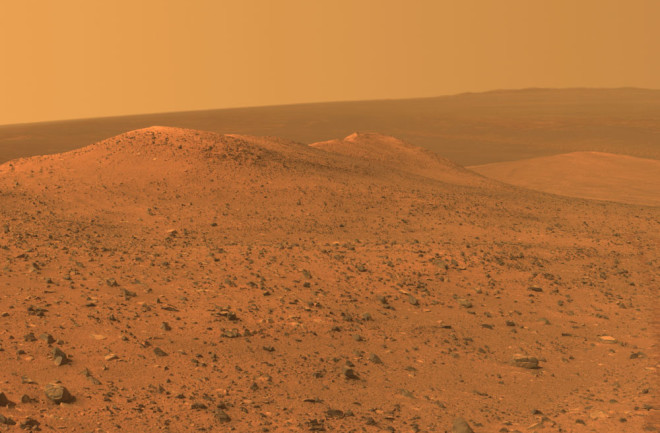 Mars has long been the best candidate to find extraterrestrial life. (Credit: NASA)

For well over 1,500 years, humanity accepted that Earth was the center of the solar system. After all, the Bible — which was the scientific authority at the time — said this was so.

Then along came Nicolaus Copernicus, who in the 16th century dared to challenge the church and mathematically described a solar system with the sun at its center. After his death, Galileo Galilei’s observations of heavenly bodies further supported the Copernican model. The Catholic Church, fearing such a finding undermined the supreme authority of the Bible, charged him with heresy. Galileo would be sentenced to life imprisonment, but was allowed to serve his sentence at home due to his declining health.

So often, institutions that wield incredible power loathe major paradigm shifts that could undermine their authority and ability to monopolize the truth. Informing the masses that everything they’ve been told is wrong, after all, could result in a social upheaval that tears society apart, at least the thinking goes.

Today, the world is still grappling with a haunting question: Are we alone in this infinite universe, or is life infinitely diverse throughout the universe? To date, we are still alone, but discovering extraterrestrial life would tie a definitive bow on that existential question. In other words, it would be a major paradigm shift. So if we finally determine that we are indeed not alone, will the very fabric of society tear apart?

In fact, humanity might embrace the news with open arms. That’s the conclusion from Michael Varnum, a psychology professor at Arizona State University who is also part of the university’s Interplanetary Initiative, a research group aimed at building a social framework for a future extraterrestrial society. Varnum took on one of the group’s pilot projects, which was to empirically answer one question: How will humankind react to the discovery of life off Earth?

It’s a question that few researchers have sought to study, but Varnum was up for the task.

“I’m a person who has been into science and sci-fi for some time,” he said.

The Robertson Panel in 1953 warned of mass hysteria if alien life were confirmed. Twenty-five percent of Americans in a recent survey expected people to panic when we discover alien life. Orson Welles certainly didn’t supply any evidence that humanity would keep its cool (news of the subsequent panic may have been grossly exaggerated, however). But Varnum’s study indicates this all hyperbole. Reality would probably be far more mundane.

First off, it’s far more likely that we’ll discover microbes or “non-intelligent” alien life before we meet sentient otherworldly beings. So Varnum limited the scope of the study to human reactions to news that scientists confirmed microbial alien life exists.

They started with a preliminary contextual analysis, measuring the reactions to news that extraterrestrial life might exist. They included five primary “discovery” events: the 1967 discovery of pulsars, the 1977 “Wow!” signal, the 1996 discovery of fossilized microbes on Mars, the 2015 discovery of Tabby’s star, and the 2017 discovery of exoplanets in the habitable zone of a star.

They analyzed news coverage, government memos and press releases of the event to determine the percentage of words in each article that were positive, negative, reward or risk. Words describing positive affect were more prevalent that those describing negative affect. Their preliminary findings suggested that society’s overall reaction to news about alien life was positive, and more reward oriented.

They then turned to Amazon’s Mechanical Turk and asked 504 people to respond to a hypothetical situation: Imagine scientists just discovered microbial life outside of Earth. They were told to describe their reactions, as well as the reactions of other people. Again, people tended to be more positive. They repeated the experiment with a more concrete example: New York Times coverage of Bill Clinton’s 1996 announcement about Martian life, or Craig Venter’s 2010 announcement about synthetic life. Once again, alien life was viewed in a positive light.

“Positivity bias was stronger about extraterrestrial microbial life than synthetic life. There seems to be something especially positive about alien life,” says Varnum. He published results from the study this week in the journal Frontiers in Psychology.

Of course, contextual analysis of hypothetical situations and past events can’t necessarily predict what will actually happen if we confirm life off the planet. But Varnum said Clinton’s announcement 22 years ago is about as good of a test case as any, and its ultimate effect on the world was a real shoulder-shrug.

“It didn’t cause a radical shift in the way people lived their lives. It didn’t cause people to abandon anything,” Varnum says. “Human beings have been through pretty powerful paradigm shifts, from not being in the center of the universe to Darwin’s evolution. In the past, people would be afraid of them. But the notion that a discovery like this will destabilize anything, as it turns out, is kind of silly.”

Varnum thinks that confirming life exists throughout the universe might be viewed positively because it provides some comfort for lonely Earthlings.

“At least for me, it makes me feel that if we were to confirm alien life, I would feel like the universe is a warmer place; that we aren’t out here all alone,” says Varnum.