If Doctors Need Pit Crews, Tricorders Should Be Part of the Team 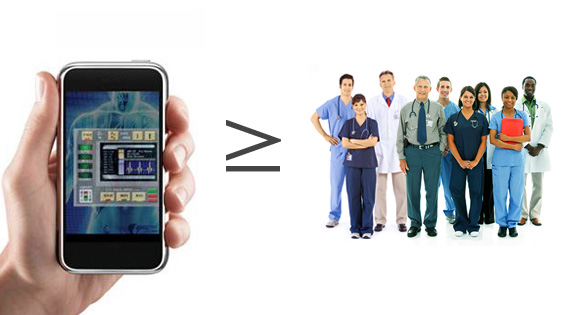 Health care is broken. In the US quality of care is tanking. Even in countries with successful universal health care systems costs are rising too fast for the systems to cope. So what do we do? Atul Gawande, who knows a thing or two about improving healthcare, argues in his commencement address to Harvard that doctors need pit crews:

We are at a cusp point in medical generations. The doctors of former generations lament what medicine has become. If they could start over, the surveys tell us, they wouldn’t choose the profession today. They recall a simpler past without insurance-company hassles, government regulations, malpractice litigation, not to mention nurses and doctors bearing tattoos and talking of wanting “balance” in their lives. These are not the cause of their unease, however. They are symptoms of a deeper condition—which is the reality that medicine’s complexity has exceeded our individual capabilities as doctors.

Gawande has two main arguments. First, that when doctors use checklists they prevent errors and quality of care goes way up. Second, that doctors need to stop acting like autonomous problem solvers and see themselves as a member of a tight-knit team. Gawande is one of the few sane voices in the health care debate. However, later on in his speech, he says that the solution to the health care conundrum is not technology. To a large degree, I agree with him. But not completely. Tech still has a big role to play. If we take a closer look at Dune and Star Trek, we'll see why Qualcomm and the X-Prize Foundation are ponying up 10 million bucks to fund a piece of medical technology that could help make Gawande's dream of team-based medicine a bit closer to becoming reality. In Star Trek: The Next Generation, Beverly Crusher is responsible for a starship with just over a thousand crew members of varying ages and species. Sickbay is, however, not manned by a huge number of staffers. Normally it's just Dr. Crusher and an assistant or two. Furthermore, Crusher is no Gregory House MD. She lacks both his encyclopedic mind and his caustic personality. Yet Crusher is able to handle a hypothetical complexity that should blow to smithereens anything current doctors could possibly face. How? The X-Prize Foundation has some ideas – Crusher has a few pieces of tech that let her treat the patient instead of requiring her to be an all-in-one interspecies diagnostician, surgeon, disease knowledge database, and bedside manner superstar. Two tools - the tricorder and the ship's computer - enable her to access a huge amount of precise data and then compare every known condition or disease against that data to find relevant and probable causes. Qualcomm has teamed up with the X-Prize foundation to fund what they call the Tricorder X-Prize. I wrote about the prize when it was first in the works a while ago. At that time, the prize was called the A.I. physician X-Prize. A new press release renamed the prize and Gawande's Harvard address has cast the competition ($10 million are at stake) in a new light. The goal of the prize is for a team "to develop a mobile solution that can diagnose patients better than or equal to a panel of board certified physicians." Thanks to cloud computing and ubiquitous internet access, pretty much any smartphone can access a server-based data-bank of medical diagnostic information. The trick is to make symptom and data input consistent and accurate, such that the information can be processed and compared against the database. On first glance, it seems the prize may be misnamed. The tricorder only collects data, it is Crusher and the computer that diagnose the disease. Yet for the solution to be a success, the mobile solution has to be able to, in a sense, force the person utilizing it to become the tricorder. That's where we come back to Gawande and his justified love affair with checklists. My suspicion is that the winning team will use a checklist based interface to ensure the human-based proxy-tricorder gets all the details and data necessary to ensure a proper diagnosis. For the Dune fans out there, the Qualcomm X-Prize may sound neither like an A.I. nor a Tricorder, but a digital mentat. Sentient or "thinking machines" are anathema to the inhabitants of the Dune Universe. As a result some human individuals undergo intense conditioning to train their brains in processing data and finding the most logical solution supported by the data provided. These individuals are called mentats. Give enough good data to a mentat and the mentat will provide the right answer. Mentats are used by everyone, particularly governments, to calculate outcomes of complex political decisions. Digital mentat may sound oxymoronic, but recall that a mentat is merely a person trained to achieve the skills of a computer without the risk of sentience. Data processing is the simplest of mentat tasks, but requires a level of mental acumen that is probably impossible in current real humans. But consider who would be most qualified for this data collection and entry: nurses and physicians. Instead of burdening themselves with a crushing cognitive load of patient history, symptoms, measurements, test-results, and nuances of reporting, the doctor could focus on beside manner, coaching the patient's treatment and seeking the most accurate and complete information possible. The digital mentat, given sufficient data, could do the diagnosis on its own, just as the ship's computer does for Beverly Crusher. Whether it comes in the form of a mobile solution, or even a piece of software connected to a secure database that coordinates symptom and data input, doctors are going to need a medical data processor on their pit crew. The Qualcomm X-Prize "mobile solution" will be a kind of medical mentat, able to deduce the diagnosis from the data provided. To get that data, the doctor and the rest of the medical team will have to become the Tricorder. Whether or not Qualcomm's Tricorder X-Prize will make that happen, I just don't know.But the $10 million Ansari X-Prize was enough to jump start a second space race. Maybe a combo of tech and teamwork will be enough to turn health care around.

Image via the X-Prize Foundation Qualcomm X-Prize press release page. Also strikingly familiar to the image I whipped up for my first article on the Tricorder X-Prize.