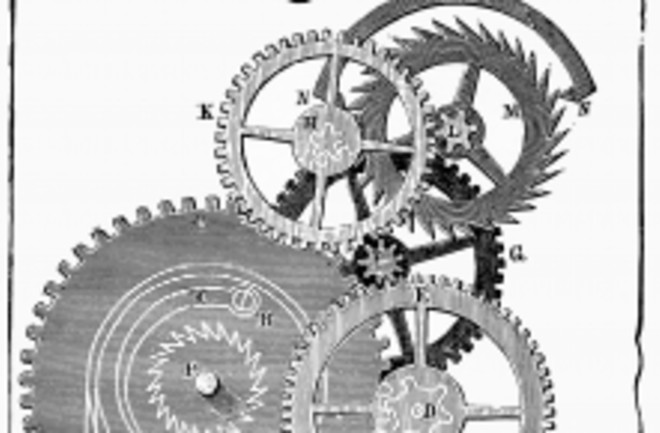 From "Tidens Naturlære," 1903, by Poul la Cour. Wikimedia Commons In the week since I wrote about Oliver Sacks and the idiot savant twins, I’ve been catching up with Season 2 of “Touch,” the TV series about an autistic boy named Jake who has an inexplicable ability to commune with a secret world of numbers -- a buried skein of mathematics in which the Golden Mean, the fibonacci sequence, the genetic code, and the Kabbalah are all mysteriously connected. Jungian synchronicity, quantum entanglement, chaos theory -- all turn out to be manifestations of an underlying order in which everything that perplexes us ultimately makes sense. It is the dream of both mystics and scientists, and I had wondered shortly after the show first began how the conceit was going to be sustained through more than a few episodes. The connecting thread has turned out to be a conspiracy by a shadowy corporation called AsterCorp -- as secretive and powerful as Massive Dynamic, purveyors of the mind-enhancing medicine Cortexiphan in “Fringe” -- to kidnap Jake and others like him in their attempt to control the world. Or the universe. It is too soon to tell. Dr. Sacks’s twins, with their power to see, hear, smell -- somehow sense within minutes if a number was prime -- would also have been on AsterCorp’s wish list. Something keeps pulling me back to Sacks’s story. That is how enchanting a writer he is. (His memoir, Uncle Tungsten, is my favorite of his books.) There are plenty of accounts in the psychiatric literature of amazing human calculators and mnemonists. Sacks describes some famous cases in his essay. But what he thought he saw in the twins went far beyond that. Somehow, as Sacks described it, they could recognize that a number is prime in the way that one might recognize a face. Something on the surface of 3334401341 told them it was prime while 3334401343 was not. For the rest of us, the only way is to start dividing. I mentioned in my earlier post that you don’t have to try every possible divisor smaller than the number you are considering. You needn’t test numbers larger than the square root, and you can ignore any factors that are even or that end in 5. But for a 10-digit number that still leaves thousands of calculations. A 20-digit number would involve billions of them. When computers and networks of computers are harnessed to test big primes the machines are programmed with sophisticated algorithms that exploit as many shortcuts as possible. (If you have a list of all the smaller primes already stored in memory, you only have to divide by those, skipping over the composites.) But the process still comes down to an enormous amount of number crunching. Sacks was not suggesting that the twins were human computers, rapidly carrying out calculations -- millions per second, one after one, or all at once in parallel. Either would be an astounding feat. He ventured instead that they were “serene contemplators of number,” endowed with “a harmonic sensibility, perhaps allied to that of music.” He called it Pythagorean. They could tell that a number had the ring of a prime the way someone might recognize a musical chord. What the twins were doing, Sacks proposed, could not be broken down into a procedure, no matter how many steps or subroutines were involved. Their talent was non-algorithmic. It was, in other words, something beyond what any conceivable computer -- electronic or biological, serial or parallel, analog or digital -- can possibly do. A computer might do it faster, but not in the twins' special way. And that is as good as suggesting that their powers would be beyond the realm of the material world, somewhere science cannot reach. Related posts: The Case of the Quantum BrainOliver Sacks and the Amazing TwinsThe Mystical Mathematics of Rock and Roll update: I’ve qualified my final sentence a bit. A reader has suggested that something that is non-algorithmic may not necessarily be beyond the material world -- a prelude to what could be a fascinating discussion of the Turing-Church-Deutsch hypothesis, which holds that "every finitely realizible physical system can be perfectly simulated by a universal model computing machine operating by finite means." That would include quantum computers. Please stay tuned for more.