I Didn't Sin—It Was My Brain

Brain researchers have found the sources of many of our darkest thoughts, from envy to wrath. 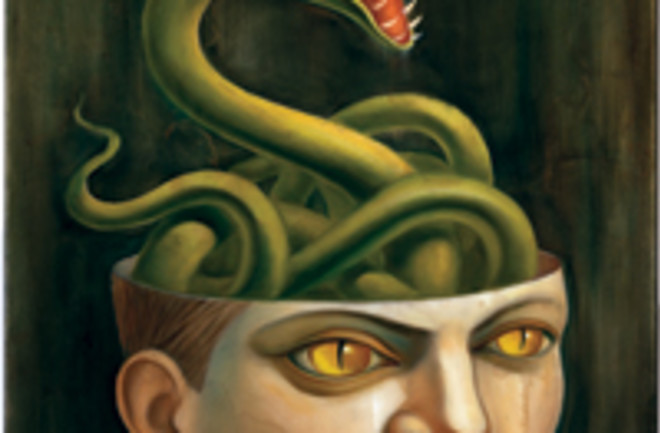 Why does being bad feel so good? Pride, envy, greed, wrath, lust, gluttony, and sloth: It might sound like just one more episode of The Real Housewives of New Jersey, but this enduring formulation of the worst of human failures has inspired great art for thousands of years. In the 14th century Dante depicted ghoulish evildoers suffering for eternity in his masterpiece, The Divine Comedy. Medieval muralists put the fear of God into churchgoers with lurid scenarios of demons and devils. More recently George Balanchine choreographed their dance.

Today these transgressions are inspiring great science, too. New research is explaining where these behaviors come from and helping us understand why we continue to engage in them—and often celebrate them—even as we declare them to be evil. Techniques such as functional magnetic resonance imaging (fMRI), which highlights metabolically active areas of the brain, now allow neuroscientists to probe the biology behind bad intentions.

The most enjoyable sins engage the brain’s reward circuitry, including evolutionarily ancient regions such as the nucleus accumbens and hypothalamus; located deep in the brain, they provide us such fundamental feelings as pain, pleasure, reward, and punishment. More disagreeable forms of sin such as wrath and envy enlist the dorsal anterior cingulate cortex (dACC). This area, buried in the front of the brain, is often called the brain’s “conflict detector,” coming online when you are confronted with contradictory information, or even simply when you feel pain. The more social sins (pride, envy, lust, wrath) recruit the medial prefrontal cortex (mPFC), brain terrain just behind the forehead, which helps shape the awareness of self.

No understanding of temptation is complete without considering restraint, and neuroscience has begun to illuminate this process as well. As we struggle to resist, inhibitory cognitive control networks involving the front of the brain activate to squelch the impulse by tempering its appeal. Meanwhile, research suggests that regions such as the caudate—partly responsible for body movement and coordination—suppress the physical impulse. It seems to be the same whether you feel a spark of lechery, a surge of jealousy, or the sudden desire to pop somebody in the mouth: The two sides battle it out, the devilish reward system versus the angelic brain regions that hold us in check.

It might be too strong to claim that evolution has wired us for sin, but excessive indulgence in lust or greed could certainly put you ahead of your competitors. “Many of these sins you could think of as virtues taken to the extreme,” says Adam Safron, a research consultant at Northwestern University whose neuroimaging studies focus on sexual behavior. “From the perspective of natural selection, you want the organism to eat, to procreate, so you make them rewarding. But there’s a potential for that process to go beyond the bounds.”

There is no sin center in the brain, no single node of fiendishness that we might be able to shut down with drugs or electrodes. With the advent of modern imaging techniques that peer into the brain as it functions, though, we at least gain some perspective on our bad habits. At the same time, we can indulge in another gratifying pastime: As other people misbehave, we can sit back and watch.

LUST In the annals of sin, weaknesses of the flesh—lust, gluttony, sloth—are considered second-tier offenses, less odious than the “spiritual” sins of envy and pride. That’s good news for us, since these yearnings are notoriously difficult to suppress.

These responses are so unique and distinctive that, in the context of an experiment, it is possible to determine whether a man is aroused just by looking at an fMRI brain scan. “These are huge effects,” Safron says. “You’re looking at the difference between something that elicits intense desire and something that does not.” (Women show a less spectacular response, Safron says, and it is unclear exactly why.)

If lechery is all-consuming, how do we ever manage to control it? As with other powerful impulses, we try to shut down arousal by calling upon the right superior frontal gyrus and right anterior cingulate gyrus, according to research led by Mario Beauregard of the University of Montreal. He and others propose that these brain areas form a conscious self-regulatory system. This network provides us with the evolutionarily unprecedented ability to control our own neural processing—a feat achieved by no other creature.

GLUTTONY Today it is difficult to regard overeating as a sin, considering the overwhelming evidence that physiology plays a more powerful role than morals in appetite and indulgence.

Physician Gene-Jack Wang of Brookhaven National Laboratory has studied the brains of overeaters since 1999, when he and colleague Nora Volkow originally observed that obesity and drug addiction alter the same brain circuits. These pathways, which rely on the neurotransmitter dopamine, are often referred to simplistically as the “reward system” but are also involved in motivation, attention, decision making, and other complex functions. In their studies, Wang and Volkow found that both drug addicts and obese people are usually less sensitive to dopamine’s rewarding effects. Being relatively numb to the pleasure and motivation signal may make them more likely to chase after a stronger thrill: more food or a bump of cocaine. Excessive stimulation further desensitizes dopaminergic neurons, and the compulsion snowballs.