To what extent does brain structure correlate with different psychological traits? An interesting new paper from Massachusetts General Hospital researchers Mert R. Sabuncu and colleagues uses a new method to examine what the authors call the 'morphometricity' of various behaviours and mental disorders. Sabuncu et al. define morphometricity as "the proportion of phenotypic variation that can be explained by macroscopic brain morphology" - in other words, the degree to which people with similar brains tend to be similar in a particular behaviour. Morphometricity is somewhat analagous to the concept of heritability from genetics. Using FreeSurfer software and the statistical technique of linear mixed-effects (LME) modelling, the authors examined over 3,800 structural MRI scans, pooled from 9 studies. Sabuncu et al.'s analysis was based on calculating an anatomical similarity matrix (ASM) across the individual brains. The ASM represents the "global morphological resemblance between pairs of individuals in the sample". Essentially, the ASM represents how similar two individuals are in overall brain structure. Sabuncu then calculated the morphometricity of each trait by comparing the structural similarity to behavioural similarity. The results showed that Alzheimer's disease is almost perfectly morphometric, with an estimated value of 0.94–1.00 (where possible values range from 0 to 1). Schizophrenia was moderately morphometric (estimate 0.55), with autism coming in slightly lower at 0.38. Perhaps surprisingly, Parkinson's disease had a much lower morphometric value of just 0.20. 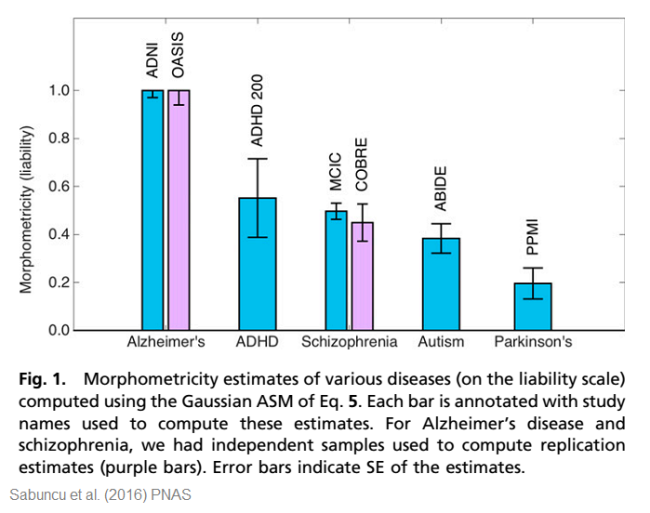 Other, non-disease-related traits, such as IQ and level of education, were highly morphometric too, with values above 0.8. In fact, IQ was slightly more morphometric than sex (IQ 0.95 vs. sex 0.93), while age was perfectly morphometric (1.00). The authors conclude that

In the dawning era of large-scale datasets comprising traits across a broad phenotypic spectrum, morphometricity will be critical in prioritizing and characterizing behavioral, cognitive, and clinical phenotypes based on their neuroanatomical signatures. Furthermore, the proposed framework will be significant in dissecting the functional, morphological, and molecular underpinnings of different traits.

This is an important paper, but we shouldn't rush to over-interpret the results. For instance, whereas Sabuncu et al. say that the high morphometricity estimates for disorders such as autism and schizophrenia "unequivocally point to a neuroanatomical substrate for these clinical conditions", this really doesn't follow. Consider the schizophrenia data in this study. The MRI scans came from a database called MCIC. The problem is that 86% of the patients in this study were taking antipsychotic medication, which might well effect brain structure. 29% of the schizophrenia patients also had a history of alcohol or drug abuse, which could leave an impact on the brain as well. So we can't say whether the high morphometricity of schizophrenia is driven by the syndrome itself, or by exposure to various substances. We should not conclude that high morphometricity means that brain structure causes a particular behaviour. In terms of the morphometricity measure itself, I note that the authors say that it "does not require cross-validation, which is often the technique used in machine learning to gauge prediction accuracy". That's because their method "exploits the entire dataset to fit the model and estimate the unknown variance component parameters, and in turn morphometricity, in an unbiased fashion." I would prefer if some validation had been performed, e.g. by calculating the morphometricity of a randomly generated 'trait' or by permuting the trait data.

Sabuncu MR, Ge T, Holmes AJ, Smoller JW, Buckner RL, Fischl B, & Alzheimer's Disease Neuroimaging Initiative (2016). Morphometricity as a measure of the neuroanatomical signature of a trait. Proceedings of the National Academy of Sciences of the United States of America PMID: 27613854