How wearing a cast affects sense of touch and brain activity

Having your arm in a cast can be a real pain but immobilising your hand in plaster has consequences beyond itchiness, cramps and a growing collection of signatures. Silke Lissek from Bergmannsheil University found that just a few weeks in a cast can desensitise the trapped hand's sense of touch, and lower neural activity in the part of the brain that receives signals from it. The uninjured hand, however, rises to the occasion and picks up the sensory slack by becoming more sensitive than before. 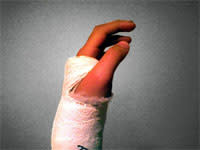 Lissek recruited 31 right-handed people, each of whom had one fractured arm encased in a cast, and compared them to 36 uninjured people. She measured the sensitivity of their fingertips by touching them with a pair of needles that were brought increasingly close together, and noting the distance at which the two needles felt like just one.

She found that the uninjured recruits had equally sensitive fingers on both hands, but for the cast-wearers, the fingers of the injured hand had become less receptive (no matter which arm was plastered). The threshold distance at which they perceived two needles rather than one was further than the same distance for the uninjured recruits. The healthy hand, however, became more sensitive and could tell the needles apart even if they were closer together than normal.

These changes happen because cast-wearers use their bound hand much less than usual, and they move the other one more to make up for it, a fact that Lissek confirmed by asking her recruits to wear small accelerometers on both hands for 2-4 hours.

The effect wasn't a long-term one, however, and a couple of weeks after the cast was removed, everything went back to normal. The exception was for people whose right hands (their dominant ones) were immobilised - their extra-sensitive left hands stayed that way for weeks after their casts were cut away. It seems that the two weeks of relying on their weaker hand had stuck.

Lissek found that these fingertip changes are reflected in the brain. She scanned the brains of another 12 volunteers using functional magnetic resonance imaging (fMRI), as they faced the same needle sensitivity test. In particular, she focused her attention on the somatosensory cortex, a part of the brain that processes our sense of touch.

The somatosensory cortex contains a virtual map of our body, with different clusters of neurons corresponding to different body parts. Lissek found that the area representing the index finger shrank if its hand had been sealed in a cast. The greater the fall in brain activity, the worse the recruits fared with the needle test. And as before, the changes were reversible - two weeks after the cast came off, everything returned to normal.

There's plenty of evidence that areas of our brains connected to our sense organs can reorganise themselves as people train their senses. The bits of the brain that process sounds are much larger in skilled musicians. And just a few weeks ago, Chinese scientists showed that in a partially blind Braille reader, parts of the brain that normally deal with detailed central images are now used for processing touch.

But Lissek's study showed that letting a sense fall into disuse (albeit unwillingly by having a cast fitted) can also affect the brain. After just a few weeks without mobility, the hand becomes less sensitive and the area of the brain devoted to processing its signals starts to shrink. You can see the same thing in rats. If their front paws are paralysed for a few weeks, the bit of their somatosensory cortex linked to that paw shrinks in size.

Lissek's take on her results is that the way our perception is organised in the brain depends on a constant stream of information from our senses. Interrupt that flow, and things will start to change very quickly. Thankfully, these changes are reversible, although it's unclear how long a limb would have to be immobilised for before its sensitivity won't bounce back to the previous status quo so easily. When it comes to the brain, it's appears to be a case of use it or lose it.