How To Make a Monkey an Adidas Fan? Sex and Celebrity 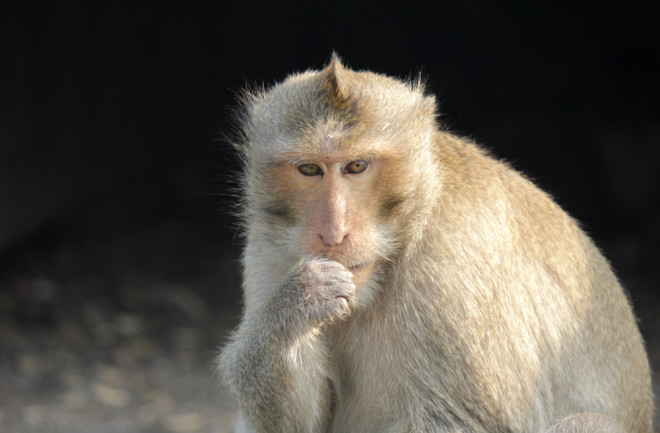 So many brands to choose from... (Credit: peekhawfang Samarm/Shutterstock) We're no better than monkeys when it comes to advertising. Or, perhaps it's better said that they're no better than us. In a clever study, researchers showed rhesus macaques brand logos (which were just random images to them) paired with a picture of either a high-status male monkey, a low-status male monkey, or female monkey genitals to see if they could elicit preferences in them. In short, they were trying out one of the oldest tricks in the advertising world — selling products with sex and celebrity. https://youtu.be/rAX6T1vO-Tc

Using touch screens, the monkeys got to choose between brands, and they received a reward no matter which option they picked. That means the decision came down entirely to what the researchers call "social rewards" — getting to see dominant monkeys or sexy ladies. The end result was that monkeys displayed a sudden preference for Adidas and Acura, despite having never tried on shoes or taken a ride in a car. It doesn't mean that the monkeys prefer the brands themselves, of course, but it's a telling example of the power of positive association. The study was published in the journal PLOS One. These preferences lasted, too, meaning that the social conditioning was far more than temporary. Brand loyalty, anyone?

An image from the study showing the images and brands the researchers used. (Credit: Acikalin et. al) The researchers identify some compelling reasons why these results should hold insights for humans. We share many of the neural mechanisms that drive social behavior, for one, and studies have shown that the same reward systems in our brains are activated in response to images of attractive individuals. Monkeys will even give up tasty rewards for a chance to view high-status and attractive individuals — and lest you feel superior, humans reacted in the exact same way in a similar study. Essentially, we're not too different from monkeys when it comes to some basic motivators. It's easy to condition both monkeys and humans to prefer something by appealing to our basest desires. But we can't extrapolate these findings too far. While humans and monkeys both respond to sex and status in similar ways, we have a much more complex relationship with brands than do monkeys. While the Adidas logo is nothing more than a shape to a monkey, for us brands have become a nuanced social gestalt. Things like our previous experiences and associations with a brand, our preferences, personality, cultural background and more play into what we like and dislike. Still, the researchers suggest, these decisions in humans still likely relate back to mechanisms that allow us to navigate social interactions — and sex and status are surely part of that calculus.