How Tilt-Shift Photography Tricks Your Brain Into Seeing Things Tiny

Landscape photographs look like dioramas when you use this technique. 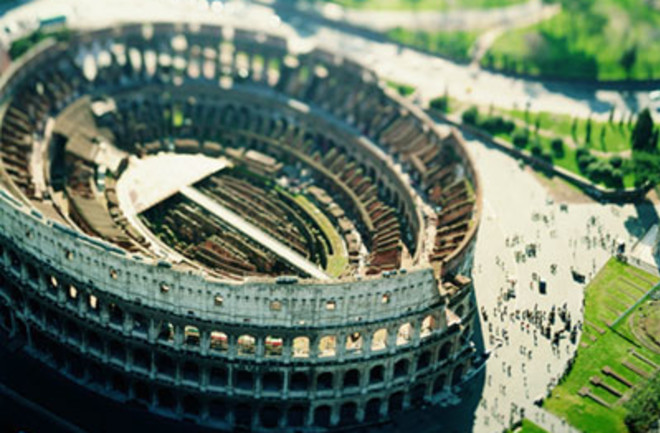 In artist Olivo Barbieri's photographs, the six-acre Roman Colosseum resembles an upside-down soda cap, Las Vegas and Rome look like model-train landscapes, and an 80,000-ton boat seems as if a child could pluck it from the water.

To create this effect, Barbieri uses a tilt-frame camera to shift the plane of focus so that it is out of alignment with the film. Normally, this allows wide-angle aerial views to be captured in proper perspective. But used incorrectly, an optical illusion occurs.

We perceive the huge structures as miniature because of the blurring created by Barbieri's overly shallow focus, says visual neuroscientist Ray Phinney of Wheaton College in Illinois. "If you were actually looking at a model, your eye would be focusing at a short distance, so things closer and farther away would be blurred in a similar way," he says. Phinney adds that the naturally bright, washed-out look of the images cinches the trick—the loss of detail makes objects seem even more model-like.