There might some truth to the beloved quote, "A reader lives a thousand lives before he dies." Researchers say reading fiction can show us different viewpoints — and shape how we relate to each other. 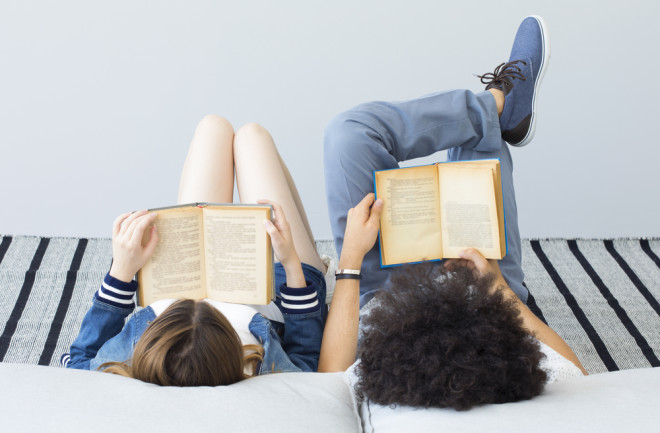 Would the world be a better place if people read more books?

Of course, asserting that reading can fix the world's problems would be naive at best. But it could help make it a more empathetic place. And a growing body of research has found that people who read fiction tend to better understand and share in the feelings of others — even those who are different from themselves.

That’s because literary fiction is essentially an exploration of the human experience, says Keith Oatley, a novelist and professor emeritus of cognitive psychology at the University of Toronto.

“Reading novels enables us to become better at actually understanding other people and what they’re up to,” says Oatley. “[With] someone who you’re married to ... or a close friend, you can actually get to know them. Reading fiction enables you to sample across a much wider range of possible people and come to understand something about the differences among them.”

Psychologists have found that empathy is innate, as even babies show it. And while some people are naturally more empathetic than others, most people become more-so with age. Beyond that, some research indicates that if you're motivated to become more empathetic, you probably can. Although there are many ways to cultivate empathy, they largely involve practicing positive social behaviors, like getting to know others, putting yourself in their shoes and challenging one's own biases. And stories — fictional ones in particular — offer another way to step outside of oneself.

Fiction has the capacity to transport you into another character’s mind, allowing you to see and feel what they do. This can expose us to life circumstances that are very different from our own. Through fiction, we can experience the world as another gender, ethnicity, culture, sexuality, profession or age. Words on a page can introduce us to what it's like to lose a child, be swept up in a war, be born into poverty, or leave home and immigrate to a new country. And taken together, this can influence how we relate to others in the real world.

“Fiction and stories do a lot of things for us,” says William Chopik, a psychologist at the University of Michigan. “They expose us to uncomfortable ideas ... and provide us with the opportunity to take other peoples’ perspectives in a safe, distanced way. In that way, fiction serves as a playground for exercising empathic skills.”

The Link Between Fiction and Empathy

In 2006, Oatley and his colleagues published a study that drew a strong connection between reading fiction and better performance on widely used empathy and social acumen tests. They tested participants on their ability to recognize author names, which helped them gauge how much fiction they read. Then, participants completed the Interpersonal Reactivity Index, which scores people across different dimensions of empathy.

Participants also took the “Mind of the Eyes” assessment, which tested people on their ability to detect and understand visual cues of other people’s thoughts and emotions. In this test, participants matched words of emotions to photos of people’s eyes. (You can take a version of the test here.) The team found that the more names of fiction authors that participants knew — and the more fiction they presumably read — the higher they scored on empathy tests.

Since then, exploring the intersection between empathy and fiction has caught on in psychology. Generally, it has been shown that the act of reading itself is what promotes a change in individuals. It’s not that people who are naturally more empathetic gravitate toward fiction, or that fiction readers have specific personality traits primed for greater empathy. “When we subtract all these things out, which we did [in our research], this idea that reading fiction enables people to understand others better was still there,” Oatley says.

Over the years, some studies have also demonstrated that literature influences how we relate to people more than other types of books. For instance, researchers of a 2013 paper published in Science assigned people to read either literary fiction, genre fiction, non-fiction or nothing. Then, the researchers measured participants' improvement on "Theory of Mind" tests. The theory of mind, which is a concept related to empathy, refers to our ability to comprehend that other people hold beliefs and desires, and that they might be different than our own. People who were assigned to read literary fiction showed the most improvement on the empathy tests. People who were assigned to read a work of non-fiction, popular genre fiction or nothing at all didn’t get a boost in scores.

The researchers also noted that there are distinctions between literary fiction and genre fiction that might explain differences in scores. Works of literary fiction tend to place greater emphasis on character development. The people and scenarios depicted in literature are more likely to disrupt reader expectations. Classic examples of literary fiction would be Toni Morrison’s Beloved or Leo Tolstoy's Anna Karenina.

On the other hand, genre fiction — think Danielle Steele romance novels or a John Grisham legal thriller — takes a more plot-driven approach. Although they’re often entertaining page-turners, these books stick to more consistent and predictable themes that tend to reinforce readers’ views rather than challenge them.

Some of the most powerful examples of fiction’s influence on empathy come from studies that specifically looked at people's attitudes toward members of stigmatized groups. For example, a 2014 study showed that elementary school and high school students in Italy and the United Kingdom became more empathic toward immigrants, refugees, and gay and lesbian people after reading Harry Potter. In their work, the researchers explained that “the world of Harry Potter is characterized by strict social hierarchies and resulting prejudices, with obvious parallels with our society.” People without magical powers are discriminated against in the series, for instance.

That same year, another research team found that people who read Saffron Dreams — a fictional account of a Muslim woman of Middle Eastern descent in New York who was the victim of racist attacks — showed less negative bias toward people of different races or ethnicities. But participants who only read a summary of the book or a work of non-fiction didn’t show a similar shift in views.

Oatley notes that different people need different things from different stories. (But in case you’re looking for a recommendation, he said you can’t go wrong with Pride and Prejudice). Memoirs, biographies and some historical non-fiction also shouldn’t entirely be ruled out, he said. As long as there are powerful stories about people and their circumstances, there’s the potential they can resonate and leave a lasting impression. And watching a story unfold in a movie also might have a similar effect on empathy as a book would.

But what people do with that extra empathy isn't well understood by scientists, says Sarah Konrath, a researcher at the Lilly Family School of Philanthropy at Indiana University.

“There is less research on the effects of reading on prosocial behaviors like giving, volunteering and helping," says Konrath. "But since empathy is one of the main motivations of such kind behaviors, I do think that reading books can help to promote more kindness overall. But like any type of media, it probably depends on the content. After all, Mein Kampf by Hitler was a book that promoted hate.”

The End of Empathy?

Sometimes, empathy is described as the glue that holds society together. Without it, humankind probably wouldn’t have gotten very far. Our ancestors depended on acts of caring for survival — such as sharing resources, help with healing the sick, and protection from predators. And we’ll probably continue needing empathy to move forward. Yet, at this particular moment in history, it can feel like empathy is on shaky ground.

In 2010, a meta-analysis by Konrath found empathy among college students declined between the 1970s and the 2000s, as measured by standard tests for the trait. During this time period, the average level of “empathic concern,” or sympathy for the misfortunes of others, declined by 48 percent. “Perspective taking,” or the ability to imagine others’ points of view, also declined by 34 percent. Konrath says she’s working on an update to the 2010 study, and that it can be difficult to pinpoint the complex reasons behind these statistical shifts.

Chopik says a common culprit that often gets blamed is a generational shift in parenting styles, such as a hyper-focus on personal achievement and high self-esteem. Critics say these trends might compromise empathy so individuals can get ahead. Another is the rise of social media and the erosion of meaningful, in-person connections.

But Chopik also notes that things might not be as dire as they seem.

“The consequences of negative changes like these — and the exact extent to which people are changing in recent generations — can be a bit overblown sometimes," he says. "There seems to be a moral panic about young people becoming less empathic or more narcissistic."