How Our Brains Build Models of the World While We Sleep, Daydream and Hallucinate

Our brains are master generators of things that only exist inside our heads. Neuroscientists studying unique mental states say these processes tell us a lot about how our minds work. 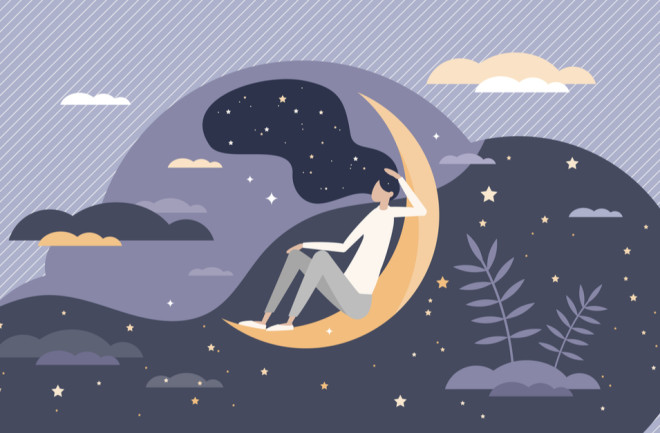 Imagine for a moment that the world surrounding your screen is mostly the same, but feels slightly off. In this world, things appear suddenly with little or no context — like an emerging sound of a man yelling that starts out as a faint, ephemeral whisper before it swells louder and louder. Just as you’ve traced the voice to some guy you haven’t seen since high school, you suddenly feel as if you’re drifting upward, closer and closer to the surface of your original world. Here, in the foggy intersection between sleep and wake, you realize the other world was a dream.

But once you’re awake in this world, there’s no longer the sound of a man yelling. Did you dream it, or hallucinate it upon waking? Maybe someone was really there? As you try to decide which is the truth, your mind wanders to the last time this experience happened to you, perhaps while on vacation, and before you know it you’re immersed in a daydream full of salty ocean waves.

Judy Ford, a neuroscientist at the University of California San Francisco and the San Francisco VA Medical Center, says these kinds of experiences are common and normal while waking up, when it’s difficult to establish the boundaries of our reality. It’s especially hard because our brains are so good at creating, in a sense, alternate realities in our mind.

All of the brain states in the above example — dreaming, mind-wandering (or daydreaming), hallucinating — are often considered to be “stimulus-independent.” That means they arise independently of the stimuli in your environment. These processes show us how the mass of tissue between our ears pulses with electrical activity to build models of the world inside our heads. And, studying the relationships between these brain states can tell us a lot about how our complex minds work.

Ford says that a hallucination is “when you sense something is happening that isn't really happening.” She primarily studies auditory hallucinations in patients with psychotic diagnoses, but says that hallucinations also occur in about 2-5 percent of the general population — though other estimates vary widely. Various studies have attempted to explain their neurological origins.

For many years, Ford’s lab has studied one hypothesis that hallucinations result from a self-monitoring failure. Ford explains that organisms across the entirety of the animal kingdom have developed ways to identify and suppress sensations coming from the self. For a tiny nematode swimming, this process means life or death — it must know if the pressure it feels is due to its own swimming, or that of an approaching predator.

Studies from Ford’s lab and others have shown that this internal versus external mechanism is disrupted in people with psychosis. She suggests this could lead to a hallucination during normal mind-wandering when the brain doesn’t recognize the voice as coming from the self.

“They are not sending a signal to auditory cortex saying, ‘hey, I'm mind-wandering. This is just me,’ ” says Ford. And without the sensory system recognizing and suppressing stimuli from the self, the voice would seem louder.

Internal Models in Our Minds

When mind-wandering is correctly identified within our sensory cortex, neuroscientists have been able to link it to specific patterns in the brain. Yet, they disagree on a formal definition of mind-wandering itself.

Jonathan Smallwood, a cognitive neuroscientist at Queen’s University in Kingston, Canada, was one of the first to study the phenomenon. He says mind-wandering is an umbrella term that researchers use to describe internal brain states like daydreaming and inner thoughts that share similarities, like a lack of attention to the outside world. When Smallwood and his colleagues study people who aren’t attending to the external world, they repeatedly find that people seem to automatically drift into thinking about themselves and other people, either in the past or the future.

Smallwood relates this kind of automatic self-generated thought to an ancient strategy of the brain. “I think what [the brain has] been doing for billions of years — however long evolution has been taking place — is trying to build internal models to anticipate and respond to the events of the environment,” he says. If that’s the case, it makes sense that our mind-wandering so often turns to social situations and our role in them. Since humans live in complex cultures, our brains need to build complex internal models that anticipate the behavior of other humans, and figure out how we should respond.

To create these internal models, work from Smallwood and his collaborators suggests that the brain makes use of an elegant design feature. Previous studies found that the Default Mode Network (DMN) is active in the brain during mind-wandering. In a 2016 study, Smallwood and his co-authors showed that the brain might be using the DMN because it’s situated in the perfect location. Their measurements revealed that regions in the DMN are located equidistant between two major sensory systems in the brain, the motor and visual cortex. “It's basically as far away from the systems that move and see as you can possibly be,” says Smallwood. The researchers hypothesize that this isn’t a coincidence: The brain likely takes advantage of this unique insular location to create internal models without being influenced by inputs coming in from the external world.

Other scientists have hypothesized that the DMN also gives rise to dreams, and that dreaming can be considered “intensified mind-wandering.” But Benjamin Baird, a cognitive neuroscientist at the Center for Sleep and Consciousness at the University of Wisconsin-Madison, says he isn’t convinced yet. Baird points to other imaging studies finding that many regions of the DMN are actually deactivated during Rapid-Eye-Movement sleep (REM), commonly associated with dreaming.

Baird has studied both mind-wandering and dreaming and highlights an important difference that likely leads to different neurobiological underpinnings: the fact that dreaming creates an interactive three-dimensional world, unlike daydreams or mind-wandering.

“Dreaming is like being in a full-blown virtual reality,” he says.

Robert Stickgold, a cognitive neuroscientist and director of the Center for Sleep and Cognition at Harvard Medical School, agrees with Baird’s take on dreaming versus mind-wandering. He says dreams reach a strength that we can’t replicate while we’re imagining things in our waking world. In fact, Stickgold says dreams are actually hallucinations — because we’re seeing, hearing, feeling and tasting things that aren’t really there.

Read More: Can You Learn How To Have A Lucid Dream?

While Smallwood suggests that mind-wandering and daydreams help us figure out how to respond to our environment, Stickgold says that dreams give the brain a more creative way to embark on “exploring possible solution paths.” Stickgold and his co-author Antonio Zadra outline this model of dreaming in their recent book, When Brains Dream.

The idea is that during dreaming in the REM stage, the brain is in a state that allows it to search for more distant associations between things that aren’t available during waking states. “It takes these newly identified associations and it builds them into a narrative, which we call a dream,” Stickgold says. This altered brain state is thought to arise due to neurobiological changes known to occur during REM, like the shut-off of certain chemical messengers and a blockage on information sent out from the hippocampus.

Yet, scientists now know that we also dream during non-REM stages of sleep, too. So Stickgold says the associations created in non-REM dreams are probably closer to those in mind-wandering. And with that, the experts agree all of our self-generated brain states can be related to each other in one way or another: Hallucinations might be misidentified mind-wandering, dreams can be classified as hallucinations, and dreaming and mind-wandering both model situations and find new associations.

But perhaps these states are all related in a much simpler way, just by existing in an active brain. “What our brain is doing all the time is constructing a model of the world, a model of reality,” says Baird. “When it's active, that's what it does.”