How objectification silences women - the male glance as a psychological muzzle

For something intangible, a glance can be a powerful thing. It can carry the weight of culture and history, it can cause psychological harm, and it can act as a muzzle. Consider the relatively simple act of a man staring at a woman’s body. This is such a common part of modern society that most of us rarely stop to think of its consequences, much less investigate it with a scientific lens. 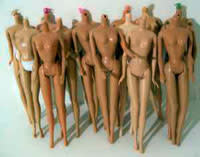 Tamar Saguy is different. Leading a team of Israeli and US psychologists, she has shown that women become more silent if they think that men are focusing on their bodies. They showed that women who were asked to introduce themselves to an anonymous male partner spent far less time talking about themselves if they believed that their bodies were being checked out. Men had no such problem. Nor, for that matter, did women if they thought they were being inspected by another woman. Saguy’s study is one of the first to provide evidence of the social harms of sexual objectification – the act of treating people as “de-personalised objects of desire instead of as individuals with complex personalities”. It targets women more often than men. It’s apparent in magazine covers showing a woman in a sexually enticing pose, in inappropriate comments about a colleague’s appearance, and in unsolicited looks at body parts. These looks were what Saguy focused on.

She recruited 207 students, 114 of whom were women, on the pretence of studying how people communicate using expressions, gestures and vocal cues. Each one sat alone in a room with a recorder and video camera. They had two minutes to introduce themselves to a male or female partner, using a list of topics such as “plans for the future” or “four things you like doing the most”. The partner was supposedly sat in the next room and either watching the speaker from the neck up, watching from the neck down, or just listening on audio. The camera was tilted or blocked accordingly.

Saguy found that women talked about themselves for less time than men, but only if they thought they were being visually inspected by a man, and particularly if they thought their bodies were being checked out. They used the full two minutes if they were describing themselves to another woman (no matter where the camera was pointing) or if they were speaking to a man who could hear but not see them. But if their partner was a man watching their bodies, they spoke for just under one-and-a-half minutes. You can see these differences in the graph below (although note that the y-axis starts at 60, a practice I don’t particularly like).

Men had no such qualms. They used the full two minutes regardless of whether they were being watched or listened to, and no matter the gender of their partner. The fact that men didn’t react in the same way is important. For a start, it shows that it’s a man’s gaze and not just any downward glance that affects a woman’s behaviour. It also puts paid to the false equivalence arguments that are often put forward when discussing gender issues (i.e. “women look at male bodies too”). 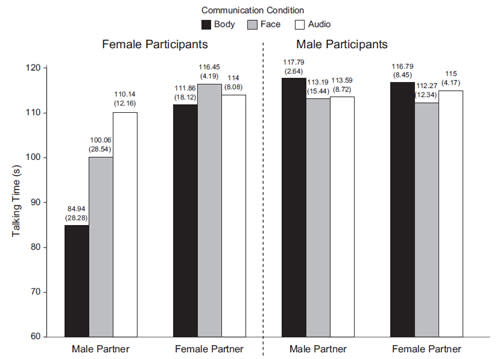 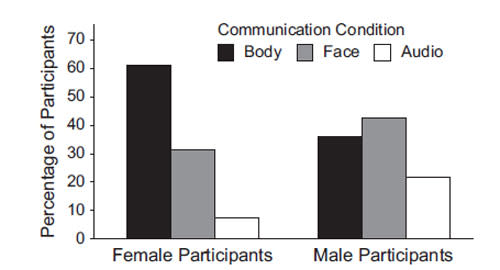 As Saguy explains, “When a woman believes that a man is focusing on her body, she narrows her presence… by spending less time talking.” There are a few possible reasons for this. Saguy suspects that objectification prompts women to align their behaviour with what’s expected of them – silent things devoid of other interesting traits. Treat someone like an object, and they’ll behave like one. Alternatively, worries about their appearance might simply distract them from the task at hand.

Obviously, this experiment used a fairly artificial scenario. In the real world, social interactions are more complicated and objectification can take place more subtly, with a quick glance rather than a blatantly angled camera.

Even so, these behaviours don’t go unnoticed. They could be major problems if the same detrimental silencing effect in Saguy’s study applies in real-world situations where being vocal is important for success – job interviews, work meetings, networking sessions, classrooms and more. There will always be hardened lechers among us but often, objectification happens without us thinking about it or becoming aware of it. It’s time, perhaps, that more of us did.