How Not to Choke Under Pressure

Sian Beilock has a formula for performing in the clutch: Don’t pay too much attention to what you are doing. 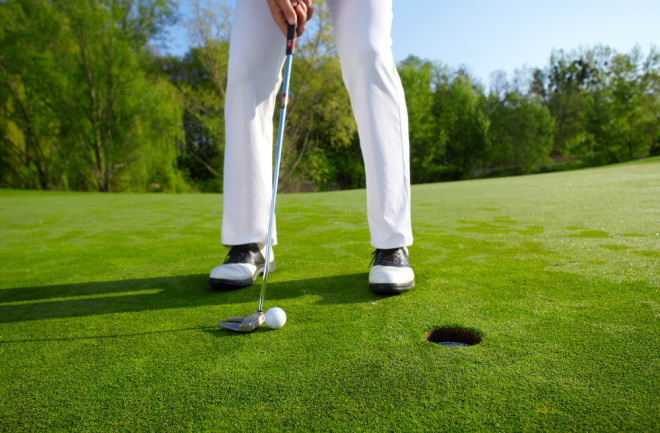 At the 2008 Beijing Olympics, the star American gymnast Alicia Sacramone was expected to grab gold. But just as she approached the balance beam, an official pulled her aside. Watching at home on TV, Sian Beilock, an associate professor of psychology at the University of Chicago, cringed. An expert on “choking”—or falling apart under pressure—Beilock knew that allowing an athlete even a second to think about what she’s about to do can be disastrous.

Indeed, after getting the all-clear and flipping backward onto the beam, Sacramone teetered, then crashed to the floor, costing her team the all-around title.

Anyone who has flubbed a presentation or bombed an easy test knows the heartbreak of the choke. Beilock, who has Ph.D.s in psychology and kinesiology, the study of movement and physical activity, has found that test takers, speech givers, musicians, and top athletes fail in similar ways. (Her lab notably features both stacks of math tests and a putting green.) Choking happens when we let anxious thoughts distract us or when we start trying to consciously control motor skills best left on autopilot. Case in point: When Beilock asked golfers to think about their elbows before taking a shot, they performed worse than usual. Another trigger that can engage the choking mechanism is too much audience support. Home teams experience a significant disadvantage during playoffs or championship games because all the love amps up the pressure—and pressure spurs anxious thoughts and a misguided impulse to take conscious control of well-oiled automatic processes.

In her new book, Choke: What the Secrets of the Brain Reveal About Success and Failure at Work and at Play, Beilock deconstructs high-stakes moments—the ones seen around the world and the ones only our mothers care about—to explore why we sometimes falter, and why other times we nail it.

How is choking different from other forms of failure? Choking is not just a poor performance but a suboptimal performance—doing worse than we are capable of. It comes about because of our perceptions of the pressure and stress associated with the situation.

What goes wrong in our brain when this happens? Working memory, housed in the prefrontal cortex, is what allows us to do calculations in our head and reason through a problem. Unfortunately, it’s a limited resource. If we’re doing an activity that requires a lot of cognitive horsepower, such as responding to an on-the-spot question, and at the same time we’re worrying about screwing up, then suddenly we don’t have the brainpower we need.

Also, once we feel stressed, we often try to control what we’re doing in order to ensure success. So if we’re doing a task that normally operates largely outside of conscious awareness, such as an easy golf swing, what screws us up is the impulse to think about and control our actions. Suddenly we’re too attentive to what we’re doing, and all the training that has improved our motor skills is for naught, since our conscious attention is essentially hijacking motor memory.

Why does thinking about what we are doing cause us problems? Areas such as the basal ganglia and motor cortex drive high-level athletic skills, which are largely outside of conscious prefrontal cortex control. We think that when people start to worry, the prefrontal cortex, or at least certain components of it, come online and essentially slow down and disrupt processes that should be left to those other areas. You see it, for example, in American football, with the tactic of “icing” the kicker by calling a time-out. This probably works because it gives the kicker time to think about aspects of his performance that should be left outside of conscious control.

In one study, Asian girls who were asked to think about their ethnic background performed better than others on a math test. Is this the opposite of a choke? Pressure can come from stereotypes about how you should perform. They can be another trigger for choking. If a girl is aware of the stereo­type that girls do worse than boys at math, she’ll do worse on a math test. On the other hand, if you encourage her to think about a different part of her identity—one that is actually stereotyped to do better, like Asian identity—then she does better.

Why do some people freeze up under pressure while others remain calm? One quality that makes people more likely to choke is a tendency to be self-conscious about their body movements. It turns out that if you self-monitor this way, you can really be in trouble in a sports situation. It also turns out that the more you worry, the more effective you become at worrying. Chronic worriers seem to be more susceptible to choking, especially in academic situations.

There are people who are less likely to choke across the board. My research and others’ work have shown that the biggest predictor is not an individual difference but how used to performing under stress someone is. Whether or not you’re an anxious person overall, becoming accustomed to the types of stressors you’re going to feel when you have to get it right is really the key to top performance. That is why SAT prep courses work—not just because they give tips about solving problems, but because they give timed practice tests that mimic the stress students feel on the day of the real test.

How can I prevent myself from overthinking? You might think that writing about your worries would just make them more salient. But there is work in clinical psychology showing that writing helps limit ruminative thoughts—those negative thoughts that are very hard to shake and that seem to grow the more you dwell on them. The idea is that you cognitively outsource your worries to the page. Writing about worries for 10 minutes right before taking a standardized test is really beneficial.

Are there any physiological factors that contribute to failure? Are we more likely to choke if we are tired, for instance? It’s really your interpretation of these states that matters. If you interpret your body’s reactions, like clammy hands, as a call to arms, like “Oh s---, I’m really in trouble now,” it’s likely that you will perform poorly. When we give people a math test in the lab and they have some sort of physiological reaction, those who are really anxious about math to begin with tend to interpret it poorly. People who like math interpret it as motivation and actually do better.

But what if I naturally get stressed and uptight when I have to take a test? Retrain yourself to see those reactions differently. Tell yourself, “My beating heart doesn’t mean that I’m about to fail; it means I’m ready to go!”