How Does the Brain Work With Half of it Removed? Pretty Well, Actually

In a new study, scans of people who had a brain hemisphere removed as children show how the organ adapted. 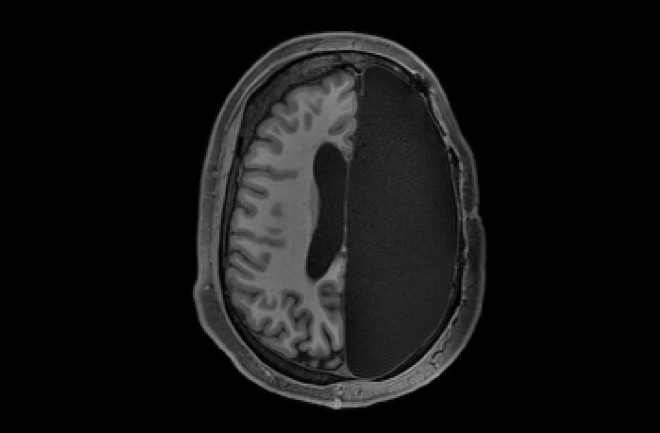 A brain scan of an adult who had an entire hemisphere removed as a child to treat epilepsy. (Credit: Caltech Brain Imaging Center)

In severe cases of epilepsy, a patient’s seizures can become so incessant, and other treatments so ineffective, that doctors will remove half of the brain during childhood to stop them. It's a procedure known as a hemispherectomy. Yet, incredibly, these patients still have intact motor, language and thinking skills.

In a study published Tuesday in Cell Reports, scientists studied six of these patients to see how the human brain rewires itself to adapt after major surgery. After performing brain scans on the patients, the researchers found that the remaining hemisphere formed even stronger connections between different brain networks — regions that control things like walking, talking and memory — than in healthy control subjects.

And the researchers suggest that these connections enable the brain, essentially, to function as if it were still whole.

Sound of Mind and Body

When Dorit Kliemann, a cognitive neuroscientist at Caltech and first author of the study, looked at a computer screen showing fMRI scans of the hemispherectomy patients, she paused. The scans only showed half a brain — and Kliemann marveled that the images were from the same patients she was chatting with just moments before.

“You can almost forget their condition when you meet them for the first time,” she said in a statement.

The six volunteers — who all had hemispherectomies as children — are now high-functioning adults with intact language skills, Kliemann says. Brain scans of the patients were compared to individuals with normal brains, in addition to a database of 1,500 typical brains from the Brain Genomics Superstruct Project.

The scientists tracked brain activity at rest, after the study participants were told to relax without falling asleep inside the fMRI machine. Afterward, the research team studied the parts of the brain that control specific functions, such as vision, movement, cognition and emotion. They found that the brain activity in hemispherectomy patients was strikingly similar to the participants who still had all of their brain matter.

Another finding came as more of a surprise. Many brain networks rely on both hemispheres, leading the researchers to predict that they would find weaker connections between different networks in the six patients. But the scans showed that the patients had even stronger connections, which means that different parts of the brain were communicating with each other more consistently. For example, there were more links between the motor and visual networks than in people with typical brains.

The researchers suggest these enhanced connections show how the brain can adapt in extreme circumstances to enable cognition and consciousness — even when half of it is gone. In the future, the study authors hope to examine how these connections can help patients with damaged or missing brain tissue compensate while performing specific tasks.

Beyond that, the scientists say that understanding how atypical brains develop and organize themselves might unlock new treatments for people with brain injuries.