How common are godless liberals?

I'm going to be speaking at the Moving Secularism Forward conference in Orlando next week. They invited me because I'm a conservative atheist public intellectual, and the three other conservative atheist public intellectuals in the United States were presumably busy. In any case, going over what I'm going to talk about I was double-checking political breakdowns by atheist &amp; agnostic proportions and ideology in the General Social Survey for after the year 2000.

I used the "GOD" variable, which asks people about their belief in God. Those who did not believe, or said there was no way to find out, I classed as "atheists & agnostics." This means that the total percentages in the population are higher than self-reports; that's because the word atheism in particular has a negative connotation (I recall that Julia Sweeney's parents were tolerant of the fact that she did not believe in God, but were aghast that she was an atheist!). "POLVIEWS" what the variable which I crossed "GOD" with. It has seven responses, from very liberal to very conservative, and I just put all liberals and conservatives into one category. 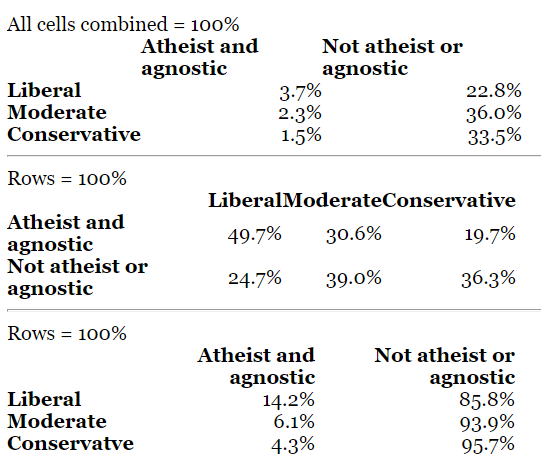 When I see these results I'm always surprised by the proportions of atheists & agnostics who define themselves as conservative. It seems way too high. I think this is due to libertarians who check the conservative option.